“The past year was complete madness. Everything in my life has changed, except my family and my girlfriend”, says Dennis van Aarssen, winner of The Voice of Holland 2019, looking back on the past year. From project manager at a digital marketing company to full-time singer with a debut album and a tour with 31 shows in the Dutch theaters. In a not so obvious genre; jazz. Or swing, as ‘crooner’ Dennis prefers to call it.

The voice: Even though Dennis had a good job as a project manager, he never lost interest in music and singing. Music was always in the back of his mind. “It started to itch again. The production team for The Voice of Holland, which I came across through another talent show I participated in, suggested that I should take part in The voice.” Not only did he participate, he actually won the 2019 edition of The voice with popular jazz and swing repertoire. “Because I managed to win The voice with my favorite genre, I knew I had to try and build a career as a singer.” 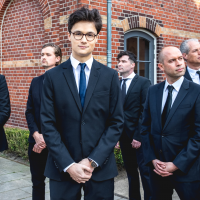 All About Jazz musician pages are maintained by musicians, publicists and trusted members like you. Interested? Tell us why you would like to improve the Dennis van aarssen musician page.