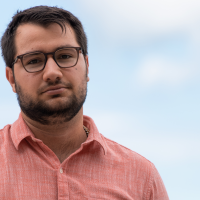 I am also reminded that once in a while, a project and composer come along that completely grab and hold your attention. This recording is certainly one of those... This is an extraordinary first release by someone I am sure you will be hearing a lot more from.
—Dave Rivello

Award-winning guitarist Denin Koch is a recognized performer, composer and educator whose musical conception synthesizes jazz, classical and rock music traditions into one powerful and unique sound. He has performed with Arturo Sandoval, Pat Metheny, Wycliffe Gordon, Branford Marsalis, Dee Daniels, Ellis Marsalis, Lynn Ligamari and Ryan Keberle and has held memberships in the Eastman New Jazz Ensemble, Spokane Jazz Orchestra and the Bob Curnow Big Band. His mentors and teachers include Gary Versace, Bob Sneider, Steve Kovalcheck, Clay Jenkins, Brent Edstrom and Dan Keberle. Koch's style has been lauded for its deep commitment to the jazz tradition whilst exploring modern ideas. His primary influences include Kurt Rosenwinkel, Jim Hall, Pat Metheny, Grant Green, Wes Montgomery, Kenny Dorham, Jimmy Page, Radiohead, Shostakovich and Dexter Gordon. ​ ​​
​​
Koch's debut record, re: manhattan project will be released in 2020. The record is comprised of a ten-movement suite for narrator, viola and jazz quintet that retells the story of the Manhattan Project, the secret U.S. government program that produced the atomic bomb at the end of WWII. Due to the project's excellence, Koch has been awarded a grant by the Institute for Music Leadership at Eastman to produce the album. The work was premiered and recorded at Eastman in October 2019. He has also premiered two big band concert pieces from the suite, "B Reactor" and "Flowers for the Shadows" with the Eastman New Jazz Ensemble. ​​
​​
In November 2019, Koch's book, Kurt Rosenwinkel's Star of Jupiter was published and released worldwide by Mel Bay Publications. The book features Koch's transcriptions and analysis of Rosenwinkel's improvisations from the 2012 quartet record Star of Jupiter. The book was completed in collaboration and approval from Rosenwinkel himself. ​​
​​
In 2017, he was named an Outstanding Musician at the Elmhurst Jazz Festival. That same year, he won the MusicFest Northwest Young Artist competition, performed with the Spokane Symphony Orchestra, and won the 2017 Whitworth Concerto Competition as a composer for his piece "season's passing." ​​
​​
In 2020, Koch was awarded a full scholarship and stipend to pursue a doctorate in jazz performance at the nationally-renowned University of Northern Colorado. While completing Master of Music coursework at the Eastman School of Music, Koch was on the faculty of the Eastman Community Music School and a member of the Institute for Music Leadership's Arts Leadership Program. He also served as instructor of undergraduate jazz history and assistant in graduate jazz history.

Upon graduating from Whitworth University with a Bachelor of Arts degree in Music Performance, Koch received the 2018 Whitworth Music Department Leadership and Service Award (as voted upon by the music faculty) for musical excellence and outstanding service to the music department. Koch attended the university on a full-ride scholarship for four years. Show less

From: re: manhattan project
By Denin Koch

All About Jazz musician pages are maintained by musicians, publicists and trusted members like you. Interested? Tell us why you would like to improve the Denin Koch musician page.