Dave Posmontier has been playing keyboard since the age of seven and has played professionally for the past 40 years. In 1980, Dave and his brother Rich formed the Posmontier Brothers Quintet, performing extensively at concerts, clubs, radio and television appearances in the Philadelphia area and producing an album, “PBQ'” of Dave's original music in 1985.

He also plays traditional and innovative klezmer music with a band called, “Klingon Klezmer.” They have performed in a number of major concert halls throughout Germany and have released two CDs.

In celebration of its 100th birthday in 2007, the renowned Settlement Music School honored 100 alumni who have made a difference in the world of music. Dave and his brother Rich were chosen to receive this honor.

Currently, Dave is playing, composing, arranging, teaching, and participating in educational jazz concerts, workshops and clinics in schools throughout the area. Dave can be heard on several CD’s of Philadelphia area jazz artists and has released a CD, “Posterity” featuring his original compositions and arrangements.

He is planning to release an acoustic trio CD in February of 2014. Show less 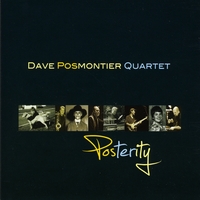 All About Jazz musician pages are maintained by musicians, publicists and trusted members like you. Interested? Tell us why you would like to improve the Dave Posmontier musician page.