Born in 1985 and raised in Vancouver and Victoria, Hersog has become a vital voice as a trumpeter, composer and arranger. He has toured North America leading large ensembles with such notable musicians as Terry Clarke, Kevin Turcotte, Remy Le Boeuff, Billy Buss, Stuart Mack, Jason Palmer and Kim Cass, as well as Brad Turner, Noah Preminger and Frank Carlberg. Hersog is often featured at the Vancouver International Jazz Festival, in addition to performing regularly in his hometown at Frankie’s Jazz Club and Pat’s Pub. As a sideman, he performs with the Vancouver Legacy Jazz Orchestra, Jaelem Bhate Jazz Orchestra, Super Trumpets and Sonny’s Cousin. 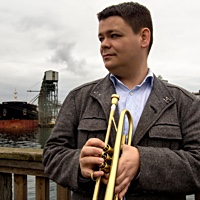 All About Jazz musician pages are maintained by musicians, publicists and trusted members like you. Interested? Tell us why you would like to improve the Daniel Hersog musician page.