Composer and saxophonist, Dan Wilkins has a new self-titled album of original music out on the PM Records label, with Horizons Quartet. Wilkins, who grew up in Lehigh Valley, Pennsylvania, went on to study saxophone at Manhattan School of Music in 2013, learning from teachers Steve Wilson, Rich Perry, Phil Markowitz and Garry Dial.

He now resides in Pennsylvania, where he educates and performs, both locally and internationally, often with his father Skip Wilkins. The pair have three albums out – 'Someday', released in 2019 on Deer Head Records, with bassist Tony Marino, and drummer Bill Goodwin; 'Czech Wishes,' also released in 2019 on New Port Line, recorded in the Czech Republic with a cast of young prominent Czech musicians; and 'Father and Son,' released on Steeplechase LookOut, featuring bassist Scott Lee and drummer Jeff Hirshfield.

"These arrangements are rich with energy and this multi-generational quartet offers us over an hour of exquisite jazz, mostly straight-ahead, well-composed and well-interpreted original music. Arrangers Wilkins and Collins, allow each talent to express themselves vividly for our listening pleasure. The quartet, as a whole, moves like a well-oiled engine, generating power, improvisation and precision that infuses each composition." - Dee Dee McNeil 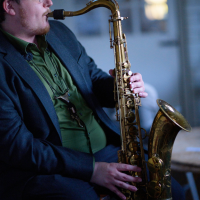 All About Jazz musician pages are maintained by musicians, publicists and trusted members like you. Interested? Tell us why you would like to improve the Dan Wilkins musician page.