Chris Butcher is a trombone player quickly establishing himself as a unique force in the Canadian jazz scene. Chris lives in Toronto, having moved from his hometown of Winnipeg, Manitoba to study at Humber College’s prestigious jazz degree program. Having recently graduated with numerous awards, Chris is already a presence in many aspects of the music scene, including recording sessions, Toronto’s many diverse live music clubs, festivals across Canada, The United States and Europe, as a music journalist, and teaching music in schools or out of his own studio.

Jazz is what drew Chris into music, and in his playing, one can hear the influence of many of the icons of the music. Chris has played with many of jazz’ current heavyweights, including Chris Potter, Kurt Elling, Dave Douglas as well as the finest jazz musicians in Canada, including Don Thompson, Richard Underhill and Steve Kirby. Additionally, Chris leads his own band, the Lower Etobicoke Sound with some of Toronto’s best young jazz musicians. The Lower Etobicoke Sound features Chris’ compositional voice, playing largely original material that reflects his life experience and love of music.

Just having turned 23, Chris is building a reputation as a fine young musician as he was selected as one of three finalists in the International Trombone Association Carl Fontana Jazz trombone competition, and there is no telling how far he will go. What is sure, however, that listeners will be enjoying Chris’ music for many years to come.

Chris has performed or recorded with:

-Richard Underhill and the Kensington Horns

-Alexis Baro and the Toronto Horns

-Lorie Wolf’s Taibele and Her Demon

-Jay Douglas and Jamaica to Toronto

-Jesse and the Rippers

Chris has opened for:

Toronto Trombone Lessons I am a trombone player and teacher who recently graduated with a Bachelor or Applied Music from Toronto’s prestigious Humber College. I have previous experience teaching out of my own studio and at music schools. I also have experience teaching in clinic/masterclass situations. I maintain a busy career playing and recording as a freelance trombonist with many of Canada’s finest musicians in countless styles. I take on all levels of students from the retired hobbyist, to a total beginner, as long as they are keen on growing and learning musically from an inspiring and knowledgeable teacher. For more info contact me directly at [email protected] 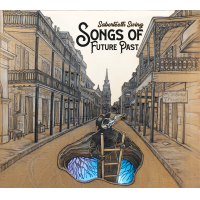 Songs of Future Past

From: Songs of Future Past
By Christopher Butcher

Raid on the Mingus House Party

All About Jazz musician pages are maintained by musicians, publicists and trusted members like you. Interested? Tell us why you would like to improve the Christopher Butcher musician page.