Chris Tedesco has distinguished himself as a one of the top call trumpet players on the music scene in Los Angeles since 1987. Equally at home performing classical trumpet, lead trumpet or jazz solos, chamber music or orchestral pieces, Chris’s sound has been heard on numerous recordings for Movies, TV shows, TV Commercials, CD recordings, and live dates with some of the biggest names in the industry. He is also very active in the “business end” of music as a musician contractor/project manager for some of this recorded and live work as well.

Early trumpet training in his hometown of Niagara Falls New York included studies with Ron Mendola, and then Chuck Lirette of the Buffalo Philharmonic. Awards for All County band and Jazz Band were awarded for 6th through 12th grade, along with All State Band and Jazz Band, and finally National Honors Band in his senior year. For his senior concerto concert Chris performed the Arban’s “Carnival of Venice” to a packed house and multiple standing ovations. Chris’s University training included one year at the State University of New York at Fredonia for one year under William Dederer and four years under Gil Johnson, (former principal trumpet of the Philadelphia Orchestra 1958-75) at the University of Miami in Florida for four years.

After completing a bachelor’s degree in Music and Music Business, Chris freelanced in Western New York in the Artpark Theater Orchestra, which allowed him the chance to play with members of the Buffalo Philharmonic, The National Ballet of Canada and the Martha Graham Dance Co. A short stint on the road with the Glenn Miller Band and over a year with The Tommy Dorsey Orchestra along with cruise ships brought him to Los Angeles in 1987 where he has been freelancing ever since. 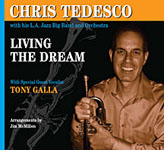 All About Jazz musician pages are maintained by musicians, publicists and trusted members like you. Interested? Tell us why you would like to improve the Chris Tedesco musician page.