Steeped in Post Bop and Blues, Detroit Saxophonist, Chris Pitts made Manhattan, San Francisco and Paris, his homes before moving to Boston. His bands have always featured energetic rhythm sections and adventurous music. He performs regularly in the Boston area and released a recording titled "42". Active as a music producer, he produces the annual Newton Piano Summit and music for several local fairs. He also serves as Festival of the Arts Chair in Newton and Co-chair of the Newton Cultural Council.

Pitts also founded the San Francisco-based Contemporary Jazz Orchestra in 1995 which performed every Monday night and directed the band until 2000. Several recordings can be purchased at jazznation.com

He is a recipient of composition and performance grants from the National Endowment for the Arts, Michigan Council for the Arts, and the Detroit Council of the Arts.

While continuing to perform, Pitts began a second career as a Television Producer and Director. Working with the likes of George Lucas and Tim Allen, his clients included Fortune 100 Companies and Foreign Television. He helped launch an educational channel for General Motors. He also Produced and Directed a series of documentaries, Jazz Masters: Keepers of the Flame which garnered several national awards and grants and can be found on YouTube. While in San Francisco, Pitts produced numerous multimedia projects and co-founded a multimedia production company. Focusing on eLearning, the company was eventually sold and Pitts moved back to New England where he continues to work on numerous educational, political, and music projects. Show less 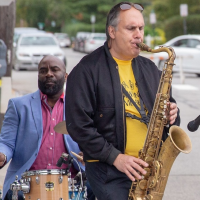 All About Jazz musician pages are maintained by musicians, publicists and trusted members like you. Interested? Tell us why you would like to improve the Chris Pitts musician page.