Born and raised in Philadelphia, Meister began on electric bass, later honing his skills on the double bass (and piano) in college. A member of the first full class to matriculate in Peabody's jazz studies department, Meister attracted attention as a student, receiving both the Alice and Leary Taylor and Richard Franko Goldman awards in performance, as well as multiple career development grants. He went on to earn a master's degree in orchestral studies at Catholic University's Benjamin T. Rome School of Music, under a full-tuition scholarship. Before joining the conservatory faculty, Meister served on the faculty of the preparatory division at Peabody, helping to develop a more comprehensive and cohesive jazz studies program as co-coordinator.

Known for his uncanny facility and distinct approach to improvisation, Meister is quickly garnering recognition among musicians and critics alike. In addition to Septagon, Meister can be heard as a sideman on several other releases, most recently including Andrea Wood's Dhyana and Todd Simon's Simon Sez. Show less

Hot Club Of Baltimore Brings Gypsy Jazz And Swing To...

Hot Club Of Baltimore Brings Gypsy Jazz And Swing In... 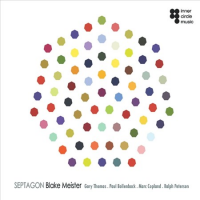 All About Jazz musician pages are maintained by musicians, publicists and trusted members like you. Interested? Tell us why you would like to improve the Blake Meister musician page.