Ariel Bart is a harmonica player and composer born in Israel. Currently based in Berlin.

Her debut album, “In Between”, was released in May 2021 on “Ropeadope Records”. In the album, Ariel presents a unique approach to the harmonica and her composed melodies which are inspired by the European jazz tradition and the middle-eastern world.

Ariel began playing the chromatic harmonica at the age of 7 and since then it's been her primary instrument. Over the years she recorded and performed with top musicians around New York and Israel including William Parker, Andrew Cyrille, Steve Swell, Achinoam Noa Nini, MikiGavrielov, Davis D’aor, and as a solo performer with The Jerusalem Orchestra East and West.

Ariel graduated from the New School University for Jazz and Contemporary Music in NYC in May 2020. She is currently a master’s student at the “Eujam” (European Jazz Master) program. Over the years Ariel studied in Israel and New York City with the likes of Aaron Parks, Reggie Workman, Shai Maestro, Jane Ira Bloom, Anat Cohen, Anat Fort, Tony Malaby, etc.

Ariel is working to extend the harmonica’s boundaries and make it more present by creating original music and collaborations with different bands worldwide. 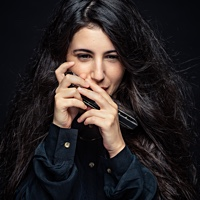 All About Jazz musician pages are maintained by musicians, publicists and trusted members like you. Interested? Tell us why you would like to improve the Ariel Bart musician page.