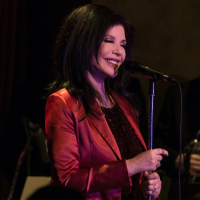 Andy James’ sound is smoky & luxurious with every lush detail of the music carried out exquisitely.
—Riff Review

Music has been coursing through smoldering jazz vocalist Andy James’ being since she was a little girl. Twice blessed as a gifted singer and dancer, Andy decided her showbiz act one would be a career as a world-class Flamenco dancer, collaborating with the milieu’s most exceptional. Now, she announces, act two, a career as a stunning jazz singer with an irresistible 40s swing-style debut album, Caravan.

“My father loved dancing, my mother love singing, and I loved my father,” says the Las Vegas and LA-based singer, laughing playfully, acknowledging her respect and affection for both her parents. “I sang as a child, but I went back and forth between singing and dance. Both my parents were always encouraging. My mother was a jazz singer, so that was close to her heart.”

Despite stints singing in a rock band (The Late Late Show), and playing bass professionally (the Australian Tour production of The Rocky Horror Picture), it’s Andy’s gifts as a dancer that first thrust her into the public spotlight. In this realm, she had an inter-continental career, first dancing Flamenco in Australia, and, later, in Madrid, alongside the greatest Flamenco artists of the day, including Antonio Canales, Rafael Amargo, and Paco de Lucia. “Flamenco is based on feeling complex offbeat and synchronized rhythms, and I think that prepared me for singing jazz melodies,” Andy opines.

Caravan’s 15-tracks showcase the rare artistic feat where a vocalist can dust off the emotionality of a timeless jazz standard with sensitivity and flair. Highlights on the album include the Ellington classic title track, an imaginative reading of the Beatles’ “Blackbird,” the 1946 chestnut by Matt Dennis and Earl Brent “Angel Eyes,” and Rogers and Hart’s “It Never Entered My Mind.”

Throughout the album, Andy’s sensual vocals are sympathetically accompanied by a piano-driven jazz combo that can swing from the rafters when the tempo gets brisk, but also navigate ballad settings with silken grace. “Caravan” is a special selection as it was one of Andy’s mother’s favorite songs and the recording ties in with her background in dance. Her rendition boasts mystical Eastern tonality textures and an irresistible beat. If you listen very closely to the track’s rhythms, you can hear Andy’s fancy footwork as she dances to the track on a mic-ed wooden plank. On “Angel Eyes,” Andy’s rich-toned vocals and expressive vibrato conjure the song’s haunting hopelessness. The slow-burn beauty of “It Never Entered My Mind” is another achingly beautiful highlight. Andy’s hard-swinging version of the Beatles “Blackbird” showcases her soulful phrasing amidst a jaunty, upbeat groove.

Up next, Andy is preparing to share her music with exclusive regional performances, and she is also putting the finishing touches on a lush big band album to be released summer 2018 titled, All The Lovely Things You Are. In conclusion, Andy says: “I felt it was time I shared this side of me, my singing, and I’m proud of what I, and these musicians, did together on this album. I loved doing it all, and I will continue on this path. I think my mom would be pleasantly surprised by this.” Show less

Bill Cunliffe Andy James Vocalist Los Angeles Vinnie Colaiuta Le Coq Records Marvin "Smitty" Smith John Patitucci Alex Acuna
“‘Tu Amor’ is the perfect expression of both my styles of work: jazz and Flamenco. It enabled me to touch on all the rhythms of both styles.”

All About Jazz musician pages are maintained by musicians, publicists and trusted members like you. Interested? Tell us why you would like to improve the Andy James musician page.