He is currently part of the Spectacular Charanga of France, VRUUMM, Banda LaMota, performs with his quartet, freelances for artists such as: João Donato, Criolo, Otto, Bixiga 70, O Terno, Trupe Chá de Boldo; makes recordings for film tracks, series, advertising, jingles and records; writes custom arrangements for the Practice of Choro and the Educational Philharmonic Orchestra EMEC; and since 2018 he has been teaching saxophone and flute classes in the Mary Harriet Speers Foundation SoArte project. Show less 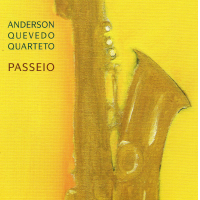 All About Jazz musician pages are maintained by musicians, publicists and trusted members like you. Interested? Tell us why you would like to improve the Anderson Quevedo Farias musician page.