Nicols began training as a classical pianist at the age of seven and continued for five years. Then she stopped studying until at nineteen, during her junior year of college in Florence, Italy, she was lucky enough to have been mentored by master pianist and teacher, Vanda Scaravelli.

Two years later she moved to Tokyo, immersing herself into the art, music and traditional culture of Japan's rich heritage. There she began sitting in with jazz musicians as a vocalist at the “Shinjiku-Inn” and the “Pitt Inn”.

Inspired and ready to work, she returned to America and settled in New Orleans. Here, Adele began studying with then Columbia Recording Artist, Ellis Marsalis, and soon got her first regular piano gig at the French Quarter's famous Fairmont Hotel.

In New Orleans she married and gave birth to two children. Her passion as a mother fueled her passion for singing (gotta calm those babies somehow!) and Nicols shifted her focus from playing piano to singing jazz standards. Although she would later return to the piano, she was quite successful as a jazz vocalist and her fan base acquired a life of its own.

Nicols' travel bug took her on the road again, this time to northern California. There she received private coaching from legendary vocalist, Mark Murphy.

Giving birth to two more children Adele remained devoted to both motherhood and music. Though her marriage ended suddenly, the silver lining was that she was able to provide for her four children by gigging at night, and be a stay at home mom during the day.

Three years later, Nicols moved her family across country one more time and settled in the Green Mountains of Vermont. She has just released her debut album, “Never Let Me Go.” In Vermont she performs in festivals as well as select venues throughout New England.

Adele Nicols is a juried artist endorsed by the Vermont Arts Council. Her album is currently available for online purchase, including AdeleNicols.com, CDBaby.com, Amazon.com, and Barnes and Noble. Show less 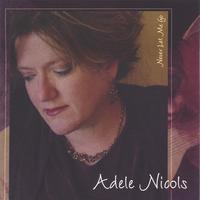 All About Jazz musician pages are maintained by musicians, publicists and trusted members like you. Interested? Tell us why you would like to improve the Adele Nicols musician page.