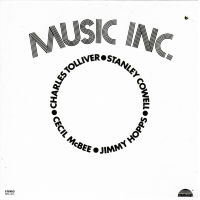 Under trumpet virtuoso Charles Tolliver's direction, the Music Inc. quartet would go on to record several challenging live albums— from locales as varied as the famed club Slugs and Yubinchokin Hall in Tokyo—for his and pianist Stanley Cowell's fledgling Strata East label during the '70s, later collected in a Mosaic Select box devoted to the group. This late 1970 studio session was the group and label's debut and features 13 additional winds and horns including Virgil Jones, Danny Moore, Jimmy Heath, Clifford Jordan and Curtis Fuller, the driving modality of the six selections complemented by beautiful arrangements. The disc pits winds and brass against the quartet and the dialogue is a continual pleasure. While Tolliver, Cowell, bassist Cecil McBee and drummer Jimmy Hopps are the primary focus, as on the rollicking "Ruthie's Heart," the additional players provide fine accents; there is no question, however, that Tolliver drives the tune along as it races into a solo drenched with liquid fire. On the opposite end of the arrangement spectrum is "Brilliant Circles"; eased in by some bass glissandos from McBee, the tune becomes a study in lush counterpoint, the winds balancing Tolliver's soaring lines in a complex web of small morphing motifs. Dick Griffin's trombone and Howard Johnson's deep baritone saxophone enhance the colors of this multi-hued score. The disc veers comfortably between the soulful and the cerebral, occasional slides, whoops and shouts obviously indebted to New Thing innovations. It is great to have this disc finally available and it makes for a fine supplement to the Mosaic set, especially since two of the quartet tunes in that box—"Ruthie's Heart" and "On the Nile"—make earlier appearances here. This is a fine group engaged in the passionate and thoughtful music of a still underrated musician and composer in Charles Tolliver.