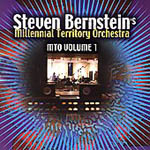 It's hard to believe that someone with Steven Bernstein's encyclopaedic musical knowledge has left any stones unturned. Recruited by filmmaker Robert Altman as a musical consultant for Kansas City, the veteran trumpeter from the downtown New York scene became fascinated with the music of the late teens and '20s, when the language of jazz was still being formed. So much so that he turned the experience into an ongoing musical project that echoes the music of bands that toured territories like the American Midwest over eighty years ago. MTO Volume 1 is the first release by Bernstein's Millennial Territory Orchestra, though the group has been playing regularly since 1999. It's a shame that it's taken so long to document the MTO, but it's been worth the wait.

While the instrumentation—horns, violin, guitar, bass and drums—mirrors groups from the era, this is hardly a retro shtick band. The MTO covers material from the time: the swinging "Boy in the Boat, the up-tempo "Happy Hour Blues and a perennial favorite, "Pennies from Heaven, sung by guitarist Matt Munisteri. But Bernstein also reinvents contemporary songs like Stevie Wonder's "Signed, Sealed, Delivered and Prince's "Darling Nikki, proving that the best songs are malleable, limited only by the arranger's imagination.

"Signed, Sealed, Delivered begins like a Delta blues; guest artist Doug Wamble's slide guitar meshes with Charlie Burnham's violin over a gentle pulse from bassist Ben Allison and drummer Ben Perowsky. The slow-burn vamp builds into a horn arrangement straight from the '20s, before Wamble enters with a soulful vocal that brings the song back to the present—and kicks some serious ass.

Remarkably, the MTO has never rehearsed, although by the time of this recording it was already an experienced unit. Bernstein's challenging arrangements are both detailed and open-ended, leaving plenty of room for powerful solos from every member of the band. "Ripple is another bluesy tune that features strong solos from Burnham and clarinettist Doug Wieselman. Clark Gayton's lithe trombone is the focus of the jump swing of "Toby, while the soulful "Cry Baby Cry is a feature for Eric Lawrence's gutsy baritone.

"Happy Hour Blues shifts gears more than a few times, but the piece feels of its time until it breaks down halfway into a fiery swing that serves as a foundation for Bernstein's best and freest solo on the disc. The MTO may use the music of nearly a century ago as its basis, but it's equally capable of looking forward. Regardless, MTO Volume 1 is just plain fun, from a group of players who are clearly having more fun than anyone should be entitled to.

Visit Steven Bernstein on the web.