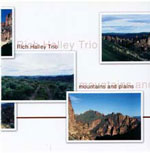 Over the years, Oregon-based saxophonist Rich Halley has travelled in the same musical circles as intrepid woodwind multi-instrumentalist and Left Coast guru Vinny Golia. And while he's even released a couple of albums on Golia's Nine Winds label with Golia in tow as performer and/or producer, Halley's recent recorded output on Louie Records has focused exclusively on his working trio featuring bassist Clyde Reed and drummer Dave Storrs. Mountains and Plains is the trio's fourth release, documenting not only the ongoing evolution of the trio's chemistry, but also Halley's left-of-center but less than extreme approach to free playing.

While Halley's tenor technique is all-inclusive, occasionally breaking out with more jagged screeches, honks, and multiphonics, he's equally concerned with space, thematic development—even groove. Proof that free jazz can be accessible, even though many of Halley's compositions are loose sketches to be used as jumping-off points, the album is surprisingly listenable—surprising, that is, if you haven't already heard the trio's earlier recordings.

Still, Mountains and Plains represents an even stronger focus on open vistas where notes are given their full due. While the term lyrical doesn't fit precisely, there's an attention to the purity of each note that lends the trio a gentler veneer. Even on tunes like "Three Way Shapes, where the rhythm is more staggered and Reed and Storrs create a gentle maelstrom underneath Halley's more spacious soprano, the feeling, while not exactly calm, avoids the kind of jarring chaos this kind of liberated free play often evokes.

Halley is also firmly tied into the tradition, with "Problematic swinging along in a relaxed fashion with a clear harmonic core, even as Halley stretches its very boundaries. Revolving around a bass ostinato, "Long Valley finds Halley building languid lines over Storr's busier rhythmic foundation. The aptly titled and ambiguous "Before Dawn starts with a scratchy arco solo from Reed, with both Halley and Storrs adding delicate percussion to the mix before evolving into a brief period of dark interplay with Halley back on tenor. The title track starts with a brief frenzied introduction from Storrs, although it ultimately becomes more episodic, occasionally breaking into a defined pulse ranging from relaxed to more insistent—akin to a heated discussion where tangential shifts are de rigeur.

That the three players are each capable of wide divergence and intense focus on what's going on around them is what gives the trio weight—a compelling argument for the virtues of longstanding musical collaboration. Putting a group of musicians together for the first time, like the most successful personal relationships, can often create an initial burst of passion, but mutual understanding develops over the long term and allows for a feeling of complete trust. Mountains and Plains finds Halley's trio in a position where everyone knows they can go anywhere and either be supported by the rest, or gently driven into new and more effective directions.