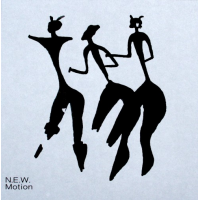 Together for over a decade, and having released two previous albums on the Bo' Weavil label, N.E.W.—the trio of drummer Steve Noble, bassist John Edwards and Alex Ward on electric guitar—need no introduction. They have nothing left to prove. Live and on disc they have shown that they are a force to be reckoned with—tight, energetic and bursting with ideas. Now, the good news is that their third album, Motion, again displays all those strengths in abundance.

As the album is a Dancing Wayang release, not only does it sound exquisite—recorded at London's Eastcote Studios, by Anna Tjan, in April 2013—it is also a limited edition vinyl record, housed in a stunning hand-printed wraparound sleeve, its cover images of cave paintings having been selected by Noble himself. Yes, this is a good old-fashioned LP, twenty minutes per side, from a trio in which all three are switched on throughout... reminiscent of the days when such groupings were glowingly referred to as "supergroups," a description that would fit N.E.W. perfectly .

N.E.W.'s music moves along a broad spectrum that encompasses free improv, rock music and many places in between. The album is well titled, for the music is constantly in motion, never staying in one place long enough to be predictable or easily pigeon-holed, never encouraging the listener to relax and luxuriate in the familiar. The constants throughout are the individual and collective skills of the players. They move, think and respond as one, with no-one hogging the limelight and no ego trips; the trio is given more importance than the contributions of any of its members. Although the contributions of each are discernible, they could rarely be termed solos as they are constituent parts of an ongoing three-way conversation.

The album opens with the upbeat "Betting on Now" which is driven along by Noble's rhythms, particularly his cymbal work. Edwards' bass is less prominent but provides an ever-present foundation for the piece. Completing the picture, Ward's fluent electric guitar creates a dense barrage of sound that incorporates chords, sustained and bent notes, mixed in with attention-grabbing spontaneous melodies. With the shift into "How it is," the three change gear and mood, creating a less rhythmic, more impressionistic piece that slowly blossoms as diffuse guitar tones and subtle cymbal washes are used to build atmosphere before the transition into "Tall and True," another rhythmic piece that covers similar ground to the opener.

Flipping the disc (how good it feels to use those words) we find the album's longest track "4th and Three" as well as its title track. After an abstract opening, the former leads into a stunning passage which builds and builds, dominated by interchanges between percussion and guitar; a strong contender for the album's best track. In contrast, "Motion" again goes for atmosphere over drama, with an understated approach featuring soaring rock-inflected guitar. It brings this richly varied album to a fittingly rousing conclusion. As so often with Dancing Wayang releases, highly recommended.