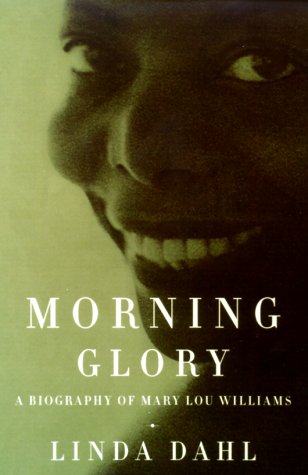 Mary Lou Williams (1910-1981): was she an important minor and perhaps neglected figure in jazz history, or was she a powerful and original stylist somehow left out of the jazz historical cannon? Should she, in fact, be ranked with the great jazz pianists like Fats Waller, Erroll Garner, Thelonious Monk and Bud Powell-all of whom admired her-and if so why hasn't she been?

These questions are fully answered in Linda Dahl's revealing, honest and sympathetic biography, but the answers she provides turn out to be complicated and closely tied to the particular ordeals Williams endured and to the choices she made to survive them. One could certainly attribute her misfortunes largely to race and gender. Dahl, however, spends little time blaming and no time soapboxing. Rather she tells a straightforward story of "the little piano girl of East Liberty" (Pittsburgh), who sought refuge in music from the abuses of her childhood, and became a truly great player, even a minor star in the 40s. Her musical adventurousness put her harmonically ahead of her time, making her arranging skills highly sought after. That same quest for new sounds fueled her embrace of bebop, a rarity among the musicians of her generation (she was a year younger than Art Tatum, two years older than Teddy Wilson, and seven years older than Monk).

Yet her musical life, despite her increasing reputation, was plagued with so many setbacks and frustrations that by the 50s, when she should have been consolidating her gains and moving into more prestigious labels and more visible touring and festival appearances, she quit the profession altogether in favor of religion and benevolent activities.

To begin with, she had to fight through the gender prejudices of the Andy Kirk band, where despite her superiority as a pianist, she had to wait until the band's regular pianist proved too unreliable before she got the steady post that put her in the spotlight as "the lady who swings with the band." But building on this success confronted her with a new set of obstacles: severe underpayment and underrecognition for the 47 compositions and arrangements she wrote for Duke Ellington, whom she never trusted; skimming off her pay by tough-guy manager Joe Glaser; the less than smashing success of her pioneering symphonic Zodiac Suite concerts of 1945-6, whose tapes were then stolen by a flamboyant but unscrupulous Danish record producer; continual stresses at her club jobs, such as the one at Cafe Society, where her violence-prone bassist broke her nose, or where she was clearly the best, though underused, element in an otherwise weak revue (staring Ethel Waters), which quickly folded; recording on the cheap for Moe Asch's Disc label. At this time she was fighting to be taken seriously as a musician and to transcend the nickname "boogie-woogie queen." On top of this, her Pittsburgh family was a continual energy drain.

Once Williams converted to Catholicism in 1952, religion became an obsession. She spent hours each day in prayer, at one point praying by name for over 1000 people. Her colleagues began to rue her attempts to convert them. Her spiritual advisors, Father Anthony Woods, S. J. and the Franciscan Brother Mario (Grady Hancock), had to counsel her to ease up. From then until the mid-60s she devoted most of her creative efforts to sacred works, including St. Martin de Porres (the Black Christ of the Andes), a six-and-a-half minute choral work, and three masses, which Dahl claims marked the achievement of her musical maturity. But these were not popular successes.

Even once Williams began playing publicly again in the 60s, she turned down regular club gigs and tours, which would have strengthened her reputation and paid some of her bills. It was at this time that she hooked up with Father Peter F. O'Brien, a young priest with a strong penchant for the arts, who eventually became her manager and later her executor.

Williams recorded only occasionally during the 50s and 60s. Today those cuts sound competent, contemporary but not particularly remarkable-until one remembers that Williams was virtually the only member of her generation who was keeping up with the absolute latest stylistic trends. Teddy Wilson, in contrast, remained stylistically in the 30s all his life. But Williams' 1953 "Round Midnight" is harmonically right on target for the time; she infuses her 1963 "My Blue Heaven" with hard-boppish blues and a touch of gospel (and block chords); while her original "A Fungus Amungus" of the same date catapults the listener into concrete music a la Cecil Taylor.

Williams had always maintained that unlike her contemporaries, she kept up with jazz piano's stylistic evolution, and towards the end of her life she was thus singularly armed to teach the subject at Duke. But in itself this would not qualify her for ranking among the truly great artists of the medium.

But something happened in the 70s. In 1971 she was tapped to record a solo piano album by Hank O'Neal for his new label, Chiaroscuro records. O'Neal had asked producer/A&R giant John Hammond who he thought deserved to be recorded, and Hammond without hesitation named Williams. The result was one of the most compelling and fertile albums of mostly blues solo piano ever recorded, From the Heart, which was only reissued in 1998 as a double-CD, renamed for its opening tune Nite Life (Chiaroscuro CR[D] 103). Williams had clearly come to a point in her career where she had consolidated her rich musical experience into a voice of exceptional personal depth. The 70s became a decade of success and appreciation for Mary, which saw her back in the studio many times, maintaining that depth where she felt most rooted: the blues. Her 1975 Live at the Cookery (Chiaroscuro CR[D] 146), keeps that level of richness, as does her 1977 Mama Pinned a Rose on Me (Pablo 2310-819-not yet reissued on CD); while her 1974 nod to contemporary funk, Zoning (Smithsonian Folkways CD 40811) sounds dated today (you can almost see the enormous Afros in the audience).

During this coda in her career besides her recording, she held down a long-term gig at the Cookery (owned by former Cafe Society owner Barney Josephson), and best of all, her appointment to the music faculty of Duke University. There, according to Dahl, she achieved "a transcendent level of artistry, and the Duke community came to realize it had greatness in their midst." She was eventually presented with the "best loved faculty member" award on her 71st birthday-it was the month that she died of bladder cancer, May 1981.

Williams left behind a foundation which she had wanted to promote jazz to young people, but it barely has enough resources to preserve and archive her music-and much of what she created remains unreleased. Also, Dr. Billy Taylor, a longtime admirer and supporter, has named his D. C. Kennedy Center Women in Jazz Festival in her honor.

So why isn't she ranked among the greats, where she clearly belongs?

At critical points in her career Williams made choices other than to develop it: spiritual, emotional, altruistic, all infused with a certain suspicion of commercial success. The result was arguably if ironically, a deeper level of musical creation during the last decade of her life, and for which she was justly celebrated at the time. Now, though, as jazz becomes more and more marginalized in contemporary culture, that very real achievement-her blues distillation of a life of struggle, suffering, and stylistic adventurousness-is in danger of being forgotten. So the task becomes harder to redress the undervaluation that keeps Mary Lou Williams just on the threshold of the jazz pantheon. Linda Dahl's Morning Glory takes us a long way in this direction. More Mary Lou Williams recordings might just take us the rest of the way.