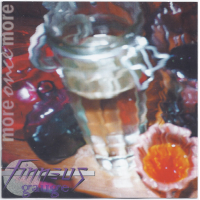 Finneus Gauge is quirky, shifty, tricky, elusive, fun — like running through a narrow hallway full of hundreds of crickets, each leaping for attention and chirping in some crazed unison. You are deluged with a myriad of notes, chords, rhythms, vocals and brief pauses just before being swept away into another delightful maelstrom of song. And songs are what this group is about — not endless jams nor lengthy progrock ascensions into the overdone "crescendo cul-de-sac." Ten well-crafted ballads and two instrumentals are served. All are tinged with the delicate intensity of angered hornets and counterpoint enough to make Schoenberg shuffle and Bartok boogie.

If you need a place to hang your ear and say, "Ah, yes they sound like . . .," well I offer these parallelisms and likely influences. Splice a tape of Hatfield and the North's Rotters Club and Bruford's Feels Good To Me together. Most importantly insert a good deal of female vocals in the cavalier-cool spirit of Annette Peacock. Now overlay it compositionally with the obvious ghost in the machine of Echolyn's As the World.

You must approach this music with a healthy appetite for complexity and the unpredictable. If you're into cutting edge, ultra-hip grooves, tempo twirls, and hyper-kinetic gymnastics in song structuring then Finneus Gauge more than satisfies. Not a half second is wasted in their pieces. There are no commercial carbon imperfections in the glistening diamonds hidden in every progressive facet of this CD. This is truly a "jazzrock-fusion-with-multi-part-vocals" roller coaster rush!