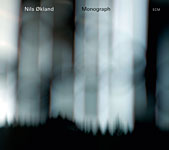 With now over a thousand releases, ECM has become as identifiable for its pristine sound production as its sumptuous design aesthetic. Each release since its 1969 inception has been adorned with beautiful photography and abstract art that has become as inherently important as the music contained within. A testament to this, Norwegian Hardanger fiddler Nils Økland's Monograph's cover could just as easily appear to be the pipes of a grand church organ, enhancing the albums liturgical quality, or a winter forest scene, embodying its cold Nordic folk roots. The shafts of light are blurred and unfocused, creeping out of some otherworldly dark foliage; a perfect representation of Økland's dolorous, coarse strings and trajectory, which pulls from melodies both light and dark. It is perhaps one of the most fitting album covers the label has released in recent times, bar the stark moonlit seascape exhibited on François Couturier's tribute to film director Andrei Tarkovsky— Nostalghia (ECM, 2006).

Økland, making his debut for the label with Monograph, is no stranger to ECM, having graced Christian Wallumrod Ensemble's Sofienberg Variations (2003) and A Year From Easter (2005), which dealt with similar Nordic folk sensibilities as well as an angular, Cage-ian abstraction. With Monograph, Okland continues to renew his homeland's early music tradition through respectful reinterpretation, using improvisation as a tool to create new a new voice with an age old vernacular. Employing the Hardanger fiddle, famous for its drone inducing sympathetic strings, the Viola D'Amore and conventional violin, Økland weaves a celestial spell that's simultaneously as rough and earthen as it is majestically stratospheric in its marriage of tradition and modernity.

Opening with "Mønster," Økland's swaying melancholy sounds like the wisp of the wind ringing through bracken and barren branches, collecting dried and broken autumnal leaves characterized by the fiddle's granular texture. The Hardanger's sympathetic strings create a foundation drone over which Økland layers sorrowful trills that blur in and out of focus, just as the artwork depicts. There is more pause for introspection on "Dialog," as mournful bows spill out into the atmosphere rich shards of half-light, knifing the space created by reverb like the chill of the Scandinavian air. Both "Rite" and "Slag" show a more harmonically uplifting side to Økland's playing, and offer a welcome counter point to a majority of Monograph's stark beauty.

With a solo instrumental recording, there is always a concern of listener fatigue. For just one man and his viola/fiddle/violin, the sound of Økland's playing is surprisingly panoramic, and the sheer detail inherent in each of the chosen instruments' tonal qualities creates a rich listening experience. For those that know Økland, it will only go further to cement his genius. For those who don't, it is perhaps a perfect introduction to the man's art and the uniqueness of the Hardanger, shown in all its unadorned beauty.