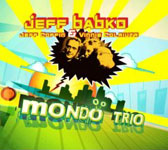 There is a touch of early '70s Zappa about "Head Trauma, with keyboard and sax laying down a grinding riff before Coffin bursts free of the groove. Coffin rotates tenor, soprano and alto saxophones throughout the album and is no slouch on the flute, playing a fine, adventurous solo on "Vote 4 Morals, over Colaiuta's blistering drums.

Vinnie Colaiuta (who has about as many drumming poll awards as he has appearances as a sideman) is in tremendous form on Mondo Trio and clearly relishes the freedom he is given. "El Nino begins with shimmering percussion and a rumbling bass drum which rises steadily in intensity as Babko's sonic dabs on Fender probe the percussive thunder.

Although nominally Babko's project, the success of Mondo Trio lies in the equal protagonism of three outstanding musicians. On "Akimbo Coffin's sax evokes a snake charmer in a souk, gradually unfurling the notes and heading out into Ornette Coleman territory. Babko's Hammond B3 solo ignites Colaiuta and the two are caught up in an enthralling dialogue with Coffin's intermittent blowing like the rasping whistle of a runaway train.

On "Young Dr. Jung Coffin's solo takes off vertically, visiting some wild places. Babko in turn, solos with equal abandon on Hammond organ, whilst back on the ground, Colaiuta serves the dual role of driving the music on and pinning it down. It is an exhilarating performance.

The album closes with "Love Theme from Mondo Trio, a wonderfully atmospheric tune which smolders in a slow groove. Babko's Hammond B3 waves and Colaiuta's pounding polyrhythms serve as a backdrop to Coffin's solo, which perhaps only Joshua Redman of today's sax players could emulate or conceive.

Jeff Babko, in stellar company, has produced an excellent debut recording and one can only hope that there is more to come from this highly talented composer/musician. Better still, if he could persuade Jeff Coffin and Vinnie Colaiuta to stay on board for the ride