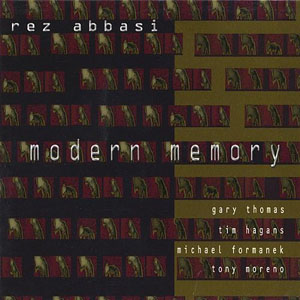 Fluid Mechanics. Rez Abbasi plays guitar like cold water pouring from a picture. His lines are seamless, swinging with no fear. Originally hailing from Karachi, Pakistan, Abbsabi’s parents soon located to Los Angeles where Rez grew up, he was influenced by Jim Hall and Pat Metheny. He moved to New York in the late 1980’s, graduated from the Manhattan School of Music where he developed his musical identity and he recorded his first disc, Third Ear (Ozone). The current disc was recorded in 1996.

Modern Memory is faintly Latin in spirit and Post-Bop in texture. These are actually just words. This description merely gets the listener into the ballpark of what this music is. It defies categorization. His music is at once traditional and modern. The disc contains three “Modern Memories” each dedicated to John Coltrane, Jim Hall, and Keith Jarrett. This music may best be described as a novel intersection of these three artists without ever sacrificing his unique voice.

Abbasis is supported by the formidable and ubiquitous Tim Hagans on Trumpet, and Michael Formanek on Bass. Gary Thomas provides his broad Tenor Sax and Scott Whitfield his pliable trombone. Tony Moreno drives the drums bus. Together they produce refined, carefully conceived music that should appeal across genre lines.