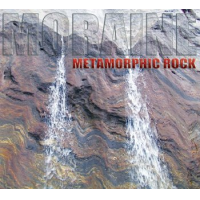 Moraine is a progressive jazz-rock fusion group led by Seattle-based guitarist/composer Dennis Rea. The group's second CD, Metamorphic Rock: Live at NEARfest, from a live show held at the Bethlehem, PA festival in 2010, finds the band growing its sound to a more competitive level, moving beyond ideas covered on its studio debut, manifest deNsity (Moonjune, 2009). Although the set is very much a composed and focused effort, it contains much of the frenzied energy of Rea's free jazz/rock fusion work with his other group and its eponymous debut, Iron Kim Style (Moonjune, 2010). Rea and company create a sound that inevitably draws King Crimson and Mahavishnu Orchestra comparisons, but Metamorphic Rock ultimately succeeds in making its own distinct concavity in the genre.

Rea's guitar work has the focus, repetitive patterns and riffs of Crimson co-founder Robert Fripp, while echoing a nimble surf guitar feel, giving the band room to operate ("Uncle Tang's Cabinet of Dr. Caligari"). Versatility is displayed by electric bassist Kevin Millard (who plays the 8-string, extended-range NS/Stick bass) and drummer Stephen Cavit as they charge like the cavalry on the opening "Irreducible Complexity," settle into supportive subtlety on "Blues for a Bruised Planet" and even fall into a slow dreamy reggae groove on "Dub Interlude."

A change in Moraine's lineup in 2010 (reflected here) accounts for some of its shift in sound. Cellist Ruth Davidson, an original band member, was replaced by baritone saxophonist/flautist James DeJoie, husband of band member/violinist extraordinaire Alicia DeJoie. James' saxophone style recalls Van der Graaf Generator's David Jackson rather than any straight-ahead jazz player. Alicia's violin playing can move from aggressive to sweetly melodic within any given song, at times assuming the lead as she thrashes the rhythm section around like a rag doll on "Kuru." The blending of sax and violin on "Disillusioned Avatar" creates such a rich, full sound that it would beg jealousy from any orchestra.

There is a healthy blend of familiar and unreleased, newer material. Included is Rea's three-part "Disoriental Suite," from his solo release of Asian fusion, Views From Chicheng Precipice (Moonjune, 2010). As challenging as it is, the piece is performed so carefully and meticulously that it sounds as if the band is supported by another entire ensemble. Metamorphic Rock: Live at NEARfest is a welcome document that will hopefully bring deserved attention to the music of Moraine and other works from Rea.