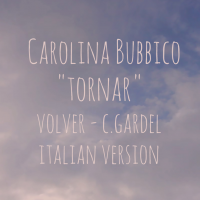 Interpreter, arranger and this time also translator. Carolina Bubbico releases "Tornar", her very personal version of "Volver", a famous tango composed in 1934 by an absolute leading figure in the history of this musical genre as the French singer, actor and composer Carlos Gardel. The song, also known to the public as the soundtrack of the homonym Pedro Almodovar film, is a gift, a small "gem" awaiting the release of the artist's next album, scheduled after the summer.