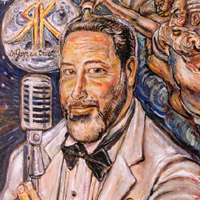 Ron Kaplan was born in Hollywood, California, into a musical family and is an avid fan of the Great American Songbook. His latest recording, Dedicated, his third release is a treasure trove of classic songs with sumptuous instrumentation performed by the cream of West Coast musicians.

He has chosen a wide range of songs for the set including the Bacharach and David's "What The World Needs Now," which is also a timely tribute to the world we currently live in, Billy Holiday's beautiful and sentimental "Autumn In New York," the wonderful Sinatra favorite "I Concentrate On You" amongst the albums killer cuts, the flute of Kenny Stahl is particularly haunting on the latter.

Ron has the easy style of Mel Torme, the phrasing of Sammy Davis Jr and the panache and delivery of Dick Farney or Bobby Caldwell, songs like Johnny Mercer's "One for My Baby" and "Girl Talk" have his native Hollywood written all over it and could be used in a remake of a Dick Tracy movie. This has all the trimmings of the old Rat Pack vocalists when the artists performed in front of candlelit, linen covered tables and communicated directly to the audience. Ron has that put-you-at-ease phraseology and charm.

His arrangements on tracks like "Old Devil Moon" with its calypso feel and Arturo Sandoval styled interlude played by Dmitri Matheny and the piano trio featured on "It Could Happen To You" feature his warm and sophisticated phrasing blending with watertight instrumentation.

The album is something you can sit down and relax and drift into a world of cabaret, footlights and razzamatazz, from the opening bars to the closing reprise Dedicated is a polished album by a sincere and genuinely compassionate vocalist and will immerse the listener into a bittersweet bliss.