By MARTIN LONGLEY
January 29, 2010
Sign in to view read count

John Zorn has invited the Chicagoan alto saxophonist Matana Roberts to curate at The Stone. The most common practice is for a month to be shared by two artists, but Roberts has all of January to herself. It's a sign of an omnivorous musical appetite that she's struggled to cram all of her dream-choices into a mere four weeks. It's also unusual for an artist not to showcase several of their own band permutations. Showing remarkable restraint, Roberts will only be performing on a single evening, as part of Zorn's monthly rent party.

She elaborates: "John approached me and I was very flattered to be asked, but also scared senseless as it seemed to me, hearing from of all my friends who've curated, that the process can be akin to a lot of mental craziness. But John actually gave me a full year to pull the calendar together, which was almost crazy in itself when you think about how far ahead he has to think for that space! In the end, I thought that the challenge would be interesting since I have rarely ever curated anywhere else. I felt that, since having the whole month to basically devote to my friends and folks who have supported and or played my music in one way or the other, that featuring myself would take away from the opportunities for others who rarely, if ever, get to play their own music at The Stone. Hilliard Greene, for instance, one of the premier bassists in NYC, has never had the opportunity to present his own music there. To me that is a tragedy and it felt good to have the means to change it."

Roberts has been residing in NYC for much of the last decade, prolifically producing a body of work that, while still highlighting her actual soloing prowess, is heavily involved with conceptual backgrounds. She's concerned with the words behind (or in front of) spontaneity, melding composition and improvisation while carefully selecting her bandmates to ensure specific sonic palettes that suit the intent, the mood and the occasion. The result is a music that sounds controlled, but without relinquishing its sense of risk.

It's completely fitting that Roberts is a member of the AACM (Association for the Advancement of Creative Musicians), as the Art Ensemble of Chicago, and in particular, Roscoe Mitchell must surely be crucial to her early musical and philosophical development. In recent years, her core project is the Coin Coin series of pieces, but Roberts' highest profile album so far has been The Chicago Project, released in 2008 by the British label Central Control. She has no settled combo here in New York, but Roberts has been operating her more stable Panther outfit in London, where she's developing something of a parallel profile. 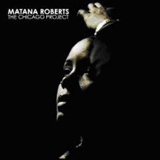 In December, Roberts reached the culmination of her artist-in-residency stint at Issue Project Room in Brooklyn. She performed the latest installment of Coin Coin, an ambitious sequence of work that sets out to probe (and evoke or respond to) its composer's ancestral lineage, traveling as far back as the 1700s. The music made radical hops from chamber severity to swinging old-time jazz, as viola and cello flourishes exchanged dominance with trinkling barroom piano. Roberts alternated between free jazz crying and sweetly-singing Johnny Hodges invocations. Her voice is also a frightening weapon. Face daubed like a Japanese Butoh dancer (or a Haitian voodoo zombie), Roberts vocalized multilayered screams that were imbued with sheer despair, emerging from a deeply primordial glottis.

"Many of the folks listed [at The Stone] are people that have performed some of my music with me for very little financial gain," Roberts continues. "So also giving them a slot was a way to say thank you and sorry I can't really compensate you for your pricelessness. I could have easily set up two weeks of Coin Coin experiments, something I did consider when John first approached me, as there are 12 segments to the narrative. I have only gotten to segment 6 now, but in the end it just didn't feel like the right time for my own little creative marathon."

Roberts is also presenting Illumination at Roulette this month. This promises to be calmer. Maybe. Illumination is not so much a band as a working strategy. "I don't name my bands too often anymore," says Roberts. "I find that in New York it's hard for me to keep a regular working band, but easier for my own creative vision to develop compositional frameworks that I can expand on and experiment with, that are very particular to themes, ideas and personal interests. I want to explore and share with other sound makers I admire. It also helps me in spreading out the web of folks I'd really like to make music with in NYC and beyond as there are so many talented folks out there dealing with improvisation these days."

Illumination is much less specific than Coin Coin. "It's my attempt to have a little balance with that as I have found doing very culturally specific creative exploration has trapped me in at times." The gig will also feature Damion Reid (drums), Shelley Burgon (harp), Graham Haynes (cornet) and Gabriel Guerreo (piano). The subject matter will be contrastingly abstract: "Illumination is based on research I am digging into about dream states and the act of dreaming while in sleep. There's so much that has been done in research on this topic and I have found some really interesting recurring themes in my own dream states, that I'm exploring in this project. I've been keeping dream journals for a long time. It occurred to me that the stories and recurrent themes showing up could actually be represented in sound in a way that might be interesting to me for further personal exploration. I also like the human universality that this approach could possibly represent. I like to compose sound, arrange sound and improvise sound almost as if molding an object of sorts. But I don't like having to sacrifice one for the sake of the other and believe that at least in my vision they can all co-exist in a way that really represents what I hear in my head, though this has not always proven to be successful!"

Burnt Sugar, If You Can't Dazzle Them with Your Brilliance, Then Baffle Them With Your Blisluth (Trugoid, 2004)