Mark Hetzler: Blues, Ballads, and Beyond: Influences Outside the Concert Hall 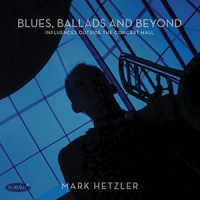 The trombone has proven not so an elusive lead instrument in jazz. But what of moving beyond jazz. There is classical literature addressing the instrument. Wolfgang Amadeus Mozart's bastardly father, Leopold, composed the first classical trombone piece, Concerto for Alto Trombone in 1756. Josef Haydn's brother, Michael, composed Concerto shortly after in 1764. Nikolai Rimsky-Korsakov, Jan Sandstrom, Arvo Part, Ernst Block, they all tried their hand at taming the beast so masterfully wielded by Ory, Teagarden, Johnson, and Fuller in jazz. Trombonist Mark Hetzler has assembled a collection of contemporary trombone compositions that brighten the light on this often ill-considered instrument on his Blues, Ballads, and Beyond: Influences Outside the Concert Hall.

Hetzler presents the trombone in a variety of formats from the space poetry of Michael Colgrass' "Mystic with a Credit Card" to Robert Suderburg's crepuscular "Night Set of Trombone and Piano." Dennis Llinas pairs the trombone with vides approaching an interesting alchemy of jazz and chamber music. Enrique Crespo's "Improvisation No. 1" is a solo excursion into the brass dynamics of is instrument replete with serious musical thought tempered by a sly sense of humor. Brian Lynn's fanciful "Doolallynastics" is pure joy expressed this deadly serious camp and vocals raspberries. This may be the trombone's true temperament, one of defiance and levity.

Hetzler closes his collection with a "Sonata" by Dr. Jack Cooper. Cooper, Director of Jazz Studies at the University of Memphis, garnered impressive positive attention for two recent projects, the monumental Mists: Charles Ives for Jazz Orchestra (Planet Arts Records, 2014) and bright and innovative The Mike Waldrop Big Band's Time Within Itself (Origin, 2015) featuring Cooper's superb charts. Hetzler approaches Coopers three-section composition overtly with confidence and fertile imagination. The opening section "Mambo" features Hetzler against piano, bass, and percussion. "Solo" is exactly that, Hetzler alone, once more, exploring both smooth crevasses and rough edges of contemporary musical thought. Things are wound up in the coda, "Naningo," an anxious and moody exposition of staccato notes and brisk skipping time. For a rather specialized release, Hetzler's Blues, Ballads, and Beyond: Influences Outside the Concert Hall does for the trombone what Matt Hiamovitz's Orbit: Music for Solo Cello (1945—2014) (Pentatone, 2015) did for that instrument.