By EYAL HAREUVENI
January 26, 2014
Sign in to view read count 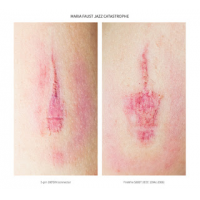 Estonian saxophonist, composer and band leader Maria Faust, based in Copenhagen, Denmark, likes to blur the distinctions between genres and styles. With her 15-musicians big band that involves musicians from Scandinavian and the Baltic countries she juggles with modern big band elements, third stream jazz, free improvised music and alternative rock and electronica. Hardly a Jazz Catastrophe unless one has a pious perspective about what music— including jazz—should be codified and played.

This big band is the most ambitious project of Faust so far after leading her own group and the all-female Pistol Nr. 9 band. The album is covered with disturbing and suggestive art by Estonian artist KIWA inspired by a short story by Franz Kafka, "In The Penal colony," but Faust music is much more uplifting. Her Big band is comprised by a remarkable set of musicians associated with Barefoot and Ilk Music labels-musician collectives.

Most of Faust compositions rely on distinct rhythmical basis, the foundation of the powerful, often wild and eccentric, multi-layered interplay that feature imaginative roles for vocals, tuba and electronics. The minimalist and cinematic "City Birds at Night"is the exception, gently assembles experimental sounds into a moving, haunting theme. "Superhero Trauma Center" is a festive piece, alternating between employing the big band in its most voluminous power and uncovering the chaotic, skeletal sonic fragments that are the core of this piece, using the distorted sounds of Stephan Sieben guitar as the main ingredients.

Faust using the same approach on "Figaro." The big band patiently and with conversational and democratic manner builds the enigmatic tension while she, on the alto sax, gently and with more narrative progression gently disassemble it. "Vladimir" highlights the fascinating rhythmical work of double bassists Nils Bo Davidsen and Adam Pultz Melbye and tuba player Kristian Tangvik. The last piece, "Love is a Dog from Hell" has an infectious, touching theme, beautifully articulated by trumpeter Kasper Tranberg.

Faust deserves wider recognition. She is an outstanding composer who uses her big band wisely to feature highly imaginative pieces, all full of passion, inventive surprises, elegance, and humor.