Marbin at The Firmament 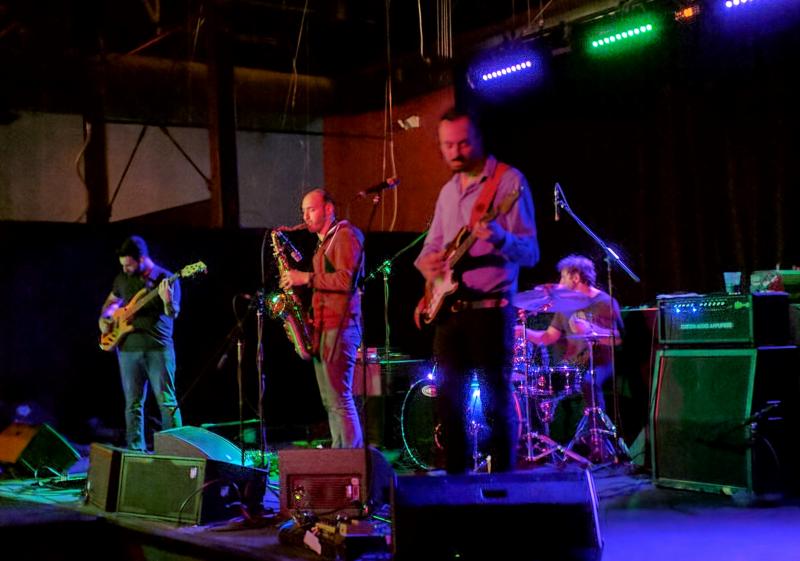 Chicago jazz-rock band Marbin is one of the great road warriors, having toured the U.S. extensively since 2011. They make fans the old-fashioned way: one at a time. The band was founded in 2007 by saxophonist Danny Markovitch and guitarist Dani Rabin in Israel (which explains the group name, a mashup of their last names). After moving to Chicago, they released their first album in 2009. Taking the stage in Greenville, South Carolina to an initial crowd of about a dozen, Rabin introduced their first song "Messy Mark" as "brand, brand new." He joked about the barricades in front of the stage "to keep the crazed fusion fans back," and encouraged audience members to move forward closer to the stage, because "it's a big, big room." The Firmament has only been open as a venue since the beginning of March, and is said to have a capacity of over 800—so it is indeed big.

It is immediately obvious that Rabin has guitar chops for miles, and there was well-rehearsed call and response between him and Markovitch's soprano saxophone. He suggested that it was "story time." The band's song titles all relate to experiences on the road. Messy Mark was a person they met at a gig in Nederland, Colorado. He was a drug dealer who offered the band mushrooms, rendering their then-current bassist incapacitated. Since they couldn't play any more, they accepted Messy Mark's offer for a place to crash. His place justified his "messy" moniker—and next thing they knew, they were making their escape with a large bag of marijuana.

After playing "Juke Joint," they went into a rubato ballad. It began with unaccompanied guitar, including expressive whammy bar manipulation, before introducing a fast, frenetic head. "Itchy Bone" had a closer geographic connection. Set in Charleston, SC, it was named for another hippie who kept goats. Markovitch switched to tenor saxophone for this one. "Red Line" was downright crunchy, with a soprano saxophone/drum break, a bass solo, and a guitar solo accompanied by tenor saxophone.

The second set included "Arkansas Jumper," another title with a story. They were playing in a mountain town, and a woman in the audience kept asking the band if they had seen a guy with a lady's purse—"he stole it from me." At the end of the show she confronted a guy who ran over an abyss—then reappeared with a knife in one hand, and a lady's purse over his shoulder—a testament to the power of crack. "He's probably dead now, but it gave us a great song title." "Just a Little Bit" was another brand new tune, a ballad that featured the saxophone. "Whiskey Taster" featured a bridge with a blisteringly fast Latin groove, with a head to match.

"Fisticuffs" came from an Arkansas story. A fan kept buying the band shots—maybe too much of a fan, and too many shots—but he followed the band to their hotel. There he decked a guy for disrespecting the band, then assumed the classic fisticuffs stance. Once again, "he's probably dead now, but he gave us a great song title." The last tune in the set was "Israeli Jazz," the title tune from the current album, followed by an encore. The audience may have been a little light, but they had a good time. And the band played as if they were playing to a full house.