By IAN PATTERSON
September 10, 2008
Sign in to view read count 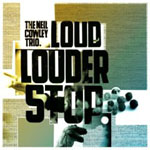 To win the BBC Jazz Album of the Year poll is a laudable achievement, but might it be a double-edged sword? The Neil Cowley Trio won the prestigious British award for Displaced (Hide Inside Records, 2007) and joined trumpeter Colin Steele and saxophonists Gilad Atzmon and Tony Kofi as recent winners whose careers have received a boost as a result.

The thing is, pianist Cowley's trio is art-pop without vocals, e.s.t. unplugged and minus the devilish improvisation, jazz without borders. It's enjoyable in a "don't know what to call this but I like it" kind of way. Had it won a BRIT award, UK's the pop equivalent, the audience and the rewards would undoubtedly be much greater. It may yet happen, as Loud Louder Stop has obvious crossover appeal.

The opening number, "His Nibs," with its grandiose, recurring theme hammered on the keys, already marks the trio as something out of the ordinary, sounding as it does like the procession fanfare for a mad king. Repetitive chord riffs, powerful and majestic, are Cowley's bread and butter, and evoke Philip Glass with a few thousand volts up his rear end, and this is acoustic music remember.

This is a hard trio to pin down. Cowley's language is chord-based—they mark time and carry the melody—and improvisation is tantalizingly restrained, though here and there glimmers of Thelonious Monk-like logic cameo briefly, like little historical ripples. The tunes are the thing, and they are undoubtedly strong. The swirling, elegiac, almost classical piano intro to "Scaredy Cat" gives way to a delicious bobbing melody. The vaudeville romp of "Ginger Sheep" sounds as if Madness had composed the soundtrack to a Charlie Chaplain caper (and it could surely inspire serious moshing in appropriately fitted venues). "We Are Here To Make Plastic," with its helter skelter riffing and choppy chords, sounds like Hiromi in full flight. In truth though, influences, particularly of a jazz root, are hard to discern throughout the album.

Lyricism and boldness, always melodic, happily co-exist within these songs, typified by the epic "Clumsy Couple," with its grand theme and spacey, lullaby interludes floating on a lovely bowed bass. The trio are fired up on "Captain Backfire." Cowley's forays outside of chords, and imaginative, tumbling runs of short duration, exist within and never overpower the greater melody. Original though it is, it is difficult to imagine this trio, this music which both defies and straddles categories, without the influential recordings of the late pianist and bandleader Esbjorn Svensson.

There will be those who yearn for more improvisation from the pianist, more overt display of his undoubted virtuosity; those of a jazz bent that is. Other listeners, who would not necessarily rush to the local jazz club, will appreciate the originality of music that doesn't pretend to be anything other than melodic, anthemic and dynamic, whatever name you want to give it. Don't be fooled by the jazz award. Don't be put off by it either.