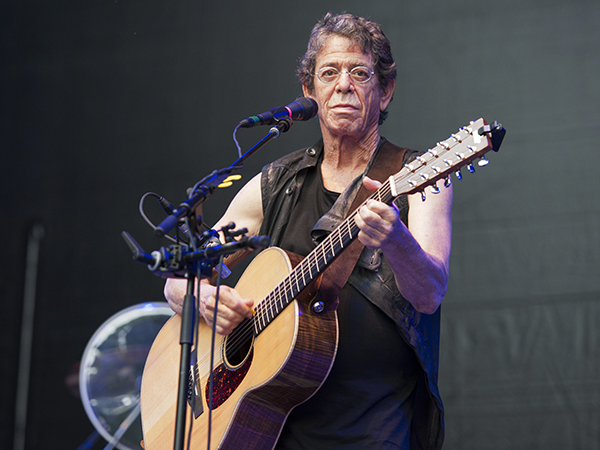 As far as omens may go, Lou Reed's two-hour performance as the headliner of the freshly spawned Kunst!rassen 's inaugural concert was a dynamic debut for the new festival. Reed is doubtless a major international talent, but he's also drawn very mixed reactions for his eclectic format of material over the years. For organizers in Bonn, a relatively safe gamble paid off as Reed and his crew laid down a straight set of catalogue hits, with very few misses on the night.

This tour, billed From VU to Lulu, draws equally from Reed's Velvet Underground vault and his 2011 collaboration with Metallica. A mercurial talent with multiple strengths, Reed has garnished heaps of both accolades and antagonists. Sometimes his intentions may be misinterpreted or misfire, but from tonight's assembled lineup and heavy, near-identical set lists, the tour's mission statement screamed rock and roll, and it was more than alright.

Weather forecasts of extreme thunderstorms didn't help the ticket booth. A crowd reported at 2,500 was on hand. Not much merchandise was moved, but this was a devoted demographic that already owned all the shirts and recordings. Perhaps there would have been apt symbolism if lightning struck and unharnessed electricity ricocheted across the stage, but plenty of voltage was unleashed anyway.

There was a well-rehearsed vibe to the proceedings, but that was basic professionalism, as opposed to posing. Bands often repeat the same sets night after night with contrasting results. Musicians either become locked in a positive progression or trapped in too-tight mechanics. In Bonn, the metal music machine that composed Reed's brain was set to flame-on. Just about the whole place lit up.

Reed followed the nonchalant band's understated entrance dressed in the standard regalia of a black sleeveless t-shirt and vest. He displayed solid muscle and sonic feedback tones. As he waved in response to boisterous greetings, a fraulein frolicked from the swarm to fling a flower. It didn't hit him as the song suggests, but it would signal a good, vicious night.

This was a '60s survivors' show, with the median age appearing well over 45. From the looks of many road warriors who danced at the rear of the assembly, they were still on the same long strange trip as when Kansas City was ruled by a guy named Max. There were a few kids, and some well-preserved fossils.

"Lou Reed!," one deep-voiced character near the front of stage right bellowed consistently, like a medieval Rhineland town crier between songs. There were many Warholistic bananas visible, and a couple of worthy Nicos drifting about.

The crowd was a bit too amped for Reed's whispering 12-string solo expository musings, and too many excited voices detracted from the set's subtle introductory chords. Chatter was a repetitive problem all night, ruining some subtle stanzas, but not unexpected or unforgivable in this case. Reed played off the devotees' misguided affection and literally barked, with gentle sarcasm, during pauses as the group roared into "Brandenburg Gate." 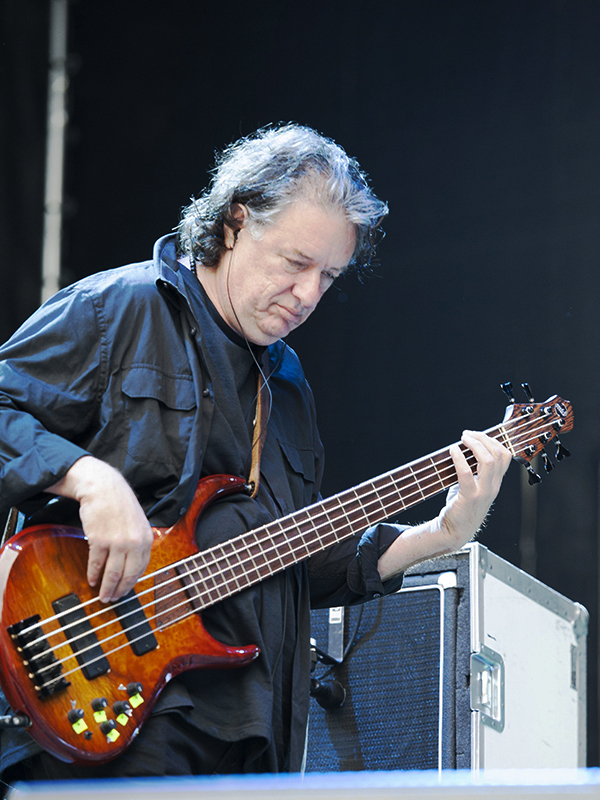 The band was properly tight, but sometimes too calculated in a jam-heavy set where songs averaged ten minutes each. Up front, Reed took many liberated solos. When he launched into short steams of chord progression delays, it got sloppy but rang true with more emotion than too-familiar group phrases that got repeated too many times.

The band was in the tough position of laying down a broad canvas background then improvising interplay off Reed's impulses. The process generally made for some good raw moments, when Reed was at his best. Facial expressions indicated both Reed and the crew were enjoying the rush. Late summer sunsets meant Reed had plenty of interactive gestures and expressions for those within eye contact range of the stage.

Keyboards, background vocals and supplemental guitars were handled well by Canadian Kevin Hearn, best known for his work in the Barenaked Ladies since 1996. Brooklyn guitarist Aram Bajakian was laidback during the first half of the show, but then blazed with in-your-face New York attitude. It's hard to imagine that Bajakian's other projects include a chamber trio of gentle, Armenian strings. Alison Weiss, who did a politely received opening set, covered backing vocals and showed why she was picked for the spot. 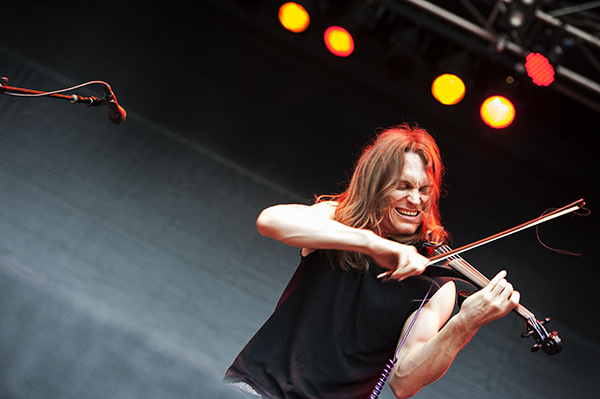 The night's MVP went to violinist and backup singer/guitarist Tony Diodore, who was the difference between extended interludes rolling on or off track more than once during the set.

An artistic analogy regarding Reed's playing and Jackson Pollock's broad, brash strokes wouldn't be much of a stretch, but to avoid going there let's just say Reed laid it on pretty heavy throughout, took many dramatic, staccato lead rips from the start and hit the mark behind abstract picking and chugs à la Frank Zappa or Bo Diddley.

Reed's droll voice was never too fine to begin with, but as a great singer/songwriter he's made it an effective trademark. Singing now constitutes more of a contributing factor than a primary expression; Reed's guitar does the talking these days. A spoken word introduction at tune-up was his only conversation piece until ensemble credits at the evening's conclusion.

"Heroin" injected stirring string moments between Diodore's pleasantly piercing violin and Wasserman's bowed bass, but the rush played thin after around fifteen minutes, just over halfway home. There was a bit of dirty boulevard comic poignancy to an old coot, maintaining sobriety for thirty years now, still howling about being strung out.

Older tunes like "I'm Waiting for My Man" and "Beginning to see the Light" were good but retained little edge after all these years. While Reed's deadpan delivery and once menacing blue velvet vocals no longer dominate, his lyrics still carry a payload.

Reed's voice meshed better with newer tunes like "Mistress Dread." An earthquake level take on "Jr. Dad" employed what vocal strength Reed has left to its best effect, as the band roared, and the closing half-hour stretch lifted the group's overall effort to an extraordinary level. It was a Blue Cheer mask for the 21st century, indeed.

"Street Hassle" very nearly achieved greatness and teased toward a boiling crescendo, while "Sad Song" slammed even closer to performance perfection. Those songs were melted wax bookends and held the evening's peak. "Walk on the Wild Side" was a well-received anti-climax without the contempt of familiarity, but came across like a Jimmy Buffett-type novelty song. Still, Krieger worked with such precision during the widely recognized sax solo that all clichés were almost forgiven, sugar. Almost.

A flat "Think It Over" was the night's only throwaway song, lost somewhere amidst Reed's more creative periods. The "Sweet Jane" finale may have lost some original sin or sting, but the nugget remains too timeless for any retro-related issues. Like the song, Reed may be historic, but that doesn't mean he's history.

"We came to play. Thank you for coming out," constituted the remainder of Reed's 25 words or less speech allotment. 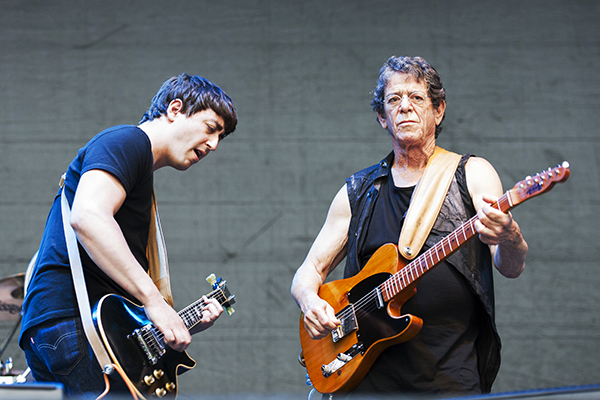 Ultimately, the positive word of mouth Kunst!rassen (art garden) generated should provide a foundation for reasonable growth. There were some growing pains, like limited public awareness, and some unavoidable issues, like unusual weather. Overall, facilities and concessions passed the test of public appeal. An informal exit poll indicated folks appreciated the show and the venue.

With less than a third of the allotted space filled in a gorgeous riverside grove, Reed's show may not have been the explosive debut of which festival promoters dreamt. It was however, a very good start, with plenty of spark for a bigger bang in the future.

The bottom line? Lou Reed came out strong and gave the people their money's worth. Straight-up rock and roll with enough experimentation to satisfy most of Reed's—or any metallic—fan base. Visual cues throughout the performance signaled open displays of spontaneity and enthusiasm. Reed's attitude onstage showed he was loose, but seriously focused on the sound, the fury, and the masses.

Organizers might consider adding an au natural area in the nearby woods. On the park side hills around the venue's perimeter, dozens gathered to listen and catch fractions of the distant stage and screen. Most danced amidst the trees during Reed's flashback inducing encore, like true satellites of love in an electric picnic. "Lou Reed," mused a smiling, twirling twentyish girl with face paint. "Lou Reed," chuckled a guy with long white hair and a pipe. The screaming guy by the stage had been correct.