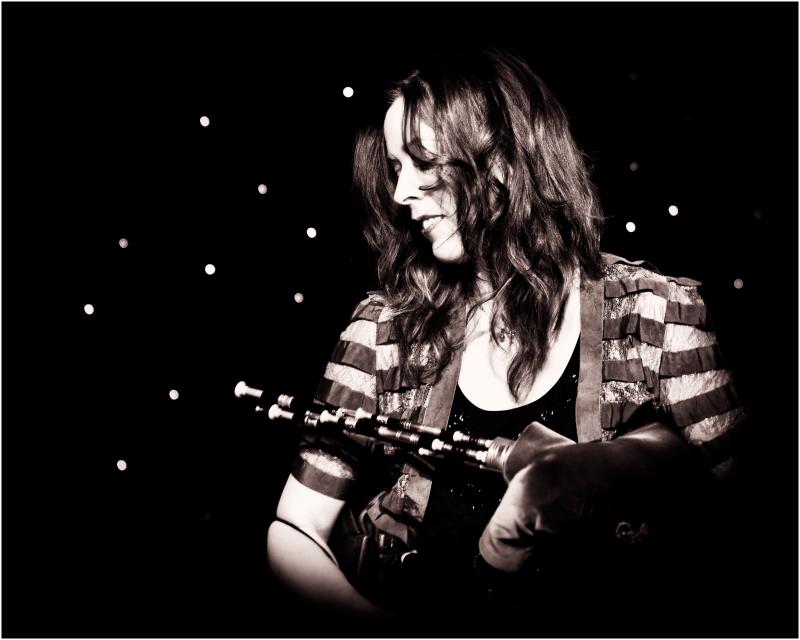 By Martin Longley
November 27, 2016
Sign in to view read count
Kathryn Tickell & The Side
National Centre For Early Music
October 17, 2016

Folk and chamber classical collide, but it's not always clear how to untangle the parts, or whether we even want to, as another entity entirely is created. The Side ensemble is a half-and-half meeting between Northumbrian piper (and fiddler) Kathryn Tickell, accordionist Amy Thatcher (also from the north-east of England), both of them being hardcore traditional music practitioners, with Ruth Wall (harp) and Louisa Tuck (cello), who arrive from airy classical quarters. Prolonged exposure since forming in 2013 has led to both factions being infused with each other's traits and tactics, resulting in a proper crossover: folk made more ethereally romantic, and classical getting soiled in the barn. Ultimately, the tunes are folkish, mostly being composed by Tickell, so it's in the delivery that classical tendencies might be discerned, though these are mainly of the modernistic variety anyway.

During her folk shows, Tickell will typically blow the Northumbrian pipes on most tunes, occasionally picking up her fiddle. With The Side, she's more likely to concentrate on that violin, turning to the pipes less frequently. This is probably due to compatibility reasons, regarding harp and cello. An overwhelming mood is provided by the high, bleak locations of Northumbria, Tickell often penning tunes that are evocative of her home, or of its denizens. She prefers to have a narrative source, so she can deliver one of her warming introductions to a number, explaining its genesis. Tickell is one of the most impressive orators in music, her storytelling almost standing on a equal footing to the actual music.

She plays a duo with Tuck (who is, busily, the principal cellist with the Oslo Filharmonien), part of the frequent breakdowns into smaller parts, making the foursome returns all the more bracing. Tickell relates how the rest of the band were struck by Wall working through a tune during a soundcheck, asking her what it was, she replying that it was what she always plays as her part in one of their regular set-pieces. Suitably embarrassed, the other three encouraged her to feature the melody more prominently during the tune's live appearance each night, forevermore. Thatcher unties her boots, and puts on her clogs, to dance a few tunes away (including "Music For A New Crossing") with some of the best footwork witnessed on a folking stage, far surpassing most of the stuttering Quebecois Canadians that your scribe has seen in action during recent years. She has a winning technique of added bassy toe-strikes, multiplying the potential for precision fast-step machine-gunning. Thatcher's accordion skills are also exceptional, of course, notably when combining telepathically with the articulately flitting wheeze of Tickell's pipes. Thatcher and Tickell play "Water Of Tyne" together, then all four offer "Gather Here," a work penned by Helen Walker earlier this year. She was the winning composer of the Alwinton Summer Concerts competition, of which Tickell was a judge. It's a slow, mournful piece, dominated by sorrowful cello sweeps. Contrastingly, a speedy Scottish trot follows, the gig ending with an encore that includes "Dark Skies Waltz," from The Side's recent debut album. Despite any reservations regarding said recording's sometimes too placid nature, the live experience of The Side is a completely different matter, providing one of the year's most substantial folk performances, multi-layered in appeal, and with its every aspect in ascendance.

Tom Brosseau is another artist to whom storytelling is a lifeblood, whether settled deeply inside one of his songs, or as part of his intimate conversation with the audience. Brosseau is a natural communicator, but with a faint undertone of serial killer unease, which he actively encourages in his songs of direct sincerity, edged with occasional creepiness. This mixture is reminiscent of that fostered by Jonathan Richman, of naivety with occasional winking from an exterior perspective. This doesn't mean that we don't believe Brosseau's every utterance, as he gathers the huddled faithful in a well-populated Basement bar. His set began with a lengthy verbal preamble, advocating local inspiration in song ("my role in life is to document North Dakota"), saying that he isn't much interested in anything else. Brosseau also confesses that he never really finished his music studies, and then sings "Fork In The Road" and "No Matter Where I Roam," this second a cheerful plod, and not your expected kind of country song. It's in the words that Brosseau updates and derails the tradition, using the form of a vintage song, simply strummed on his wanderer guitar. Next comes one of his oldest (and best) ditties, "How To Grow A Woman From The Ground," from his second album in 2004. Smeared with melancholy, his precise high notes swoop and twist, to cut at the emotions. The talking drone-song "A Trip To Emerado," has Brosseau delivering a spoken tale, lifted from his latest album, then there's 2014's "Cradle Your Device," surely the best song so far concerning cellphone monomania. He confides to the gathering that he's walked York's walls earlier in the day, visited the towering Minster and gobbled a few local pies. Then he offers Blind Blake's exceedingly grim "Rope Stretcher Blues," concluding with his own "Used To Own A Rowing Boat" and "We Were Meant To Be Together." For the encore, Brosseau initiates one of the most magical singalongs heard in a long time, choosing Leadbelly's "Goodnight Irene," to croon standing apart from the microphone, completely acoustic, joined by opening act Stillhouse on guitar and mandolin, plus most of the Basement huddle in soft singalong. Gentleness and sincerity, with no dark meanings in view...or at least not too many.

Together since 2005, this Scottish quintet specialise in a vigorous continuation of the folk tradition, taking the hoary old concept of tune-groupings that might mix reels, airs, or strathspeys, but playing with a hellbent enthusiasm and momentum, running through more than the imagined number of notes, at far greater speed than the merely mortal rate. The first notable contrast is the matching of blaring bagpipes with a dancing, tiny whistle, then "The Midnight Sun" features the combination of flute, bouzouki, fiddle, guitar and upright bass. With most of the Breabach members being multi-instrumentalists, scope for palette-changing from tune-to-tune is wide. As is often the case with this type of band, vocal songs provide a diversion, with singer-guitarist Ewan Robertson interpreting Dick Gaughan's "Outlaws And Dreamers," then the second set opening with "Nightcrawler," fiddler Megan Henderson taking the Gaelic vocals on a whisky-smuggling tale. These ditties invariably lead to the most becalmed sections of the gig, but this is immediately followed by some pipes and long-whistle action, on "We Were Poor But We Were Miserable," a rousing highlight of the set.

Could Chaim Tannenbaum be even more miserable and morbid than Loudon Wainwright III himself? The pair have been buddies, and musical partners, for around three decades, and indeed opening act Tannenbaum (vocals/guitar/banjo) was later to step up and help out the evening's main man on a few songs, towards gig's end. But even though Wainwright has lately been surrounding himself with songs about death and decay, he seems relatively cheery when set beside Tannenbaum, who delights in a massing of deep melancholy, even if laced with a bitter humour. Despite many collaborations down the decades, the 68-year-old Tannenbaum has only recently released a debut solo album. He's finally been allowed to record his immense backlog of misery. The accumulation of unchecked pessimism becomes almost grimly amusing during his 45 minutes-or-so set, even anticipating Wainwright's demise when singing a song penned in celebration of his attaining 70 years on the mortal plane.

We might expect the veteran Wainwright to have mellowed, but in reality there is zero chance of such a thing, Loudon setting out to give one of his most adrenalin-fuelled performances, sustaining this state over a longer-than-usual set. He's firing off barbs, outwards and inwards, preoccupied with family mortality, including his own, but with older songs allowing the opportunity to reflect on more youthful days. Romance, sex, early fatherhood, social comment, trivial comment: it's all here in an immense book that Wainwright seemingly has no difficulty in remembering. The act of being in the midst of a heavy UK tour schedule means that Loudon is pumped up with road-frenzy, creating a cumulative energy that presumably heightens with each coming night. There's a palpable aura of manic immersion around his buzzing sequence of fast-rolling songs (mostly on guitar, but occasionally banjo or piano), interspersed with selections from his father LW Junior's work as a popular writer for Life magazine. Even these pieces (excerpted from the Surviving Twin show, that LWIII also tours), which start off with Loudon seated in his mini stage-right boudoir, end up with him rising up, pacing the broad stage as his reading climaxes. Going right back to "Motel Blues," he confesses that nowadays he'll typically invite a woman up to his room to have her explain the wi-fi connection. The times have changed, four decades on, but this year-passage doesn't impede his passionate delivery of this classic song. The same goes for "School Days," the first track from his first album, back in 1970, sounding as if it was freshly penned. This show finds Wainwright at the peak of his powers, still able to conjure up a sustained stream of seething, satirical, poised and dangerous folk song, now armed with an extremely substantial back catalogue of numbers, unsuitable for all occasions.