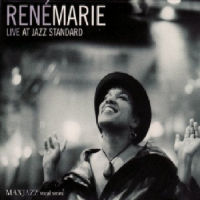 The biggest surprise perhaps on Rene Marie’s inaugural live recording is the conspicuous absence of her controversial reading of Billie Holiday’s "Strange Fruit" and the traditional "Dixie" in medley from her last MAXJAZZ recording Vertigo (MXJ114, 2001). To Marie’s credit, she does cover her previously covered "How Can I Keep From Singing" (the title of her initial MAXJAZZ release). Stunning in this release is Ms. Marie’s beautiful coupling of Ravel’s "Bolero" and Leonard Cohen’s "Suzanne." This daring association alone (the "Dixie/Strange Fruit" union not withstanding) qualifies Marie as a front-line jazz singer.

In a word, Live at the Jazz Standard simply rocks because of such courage. These are the most basic jazz vocals, backed by the traditional acoustic piano trio, except where she opts for a duet with John Toomey on Gershwin’s "I Loves You Porgy" and a cappella on "How Can I Keep From Singing." Marie fears nothing and supplies a live recording that eclipses the considerable Live At the Village Vanguard, previously released on MAXJAZZ by the formidable Mary Stallings.

Marie’s trio is superb. John Toomey is well-known in New York City and beyond as a fine accompanist and soloist, as are both Elias Bailey and Howard Curtis in their respective fields. Marie and Bruce Barth produce a near masterpiece in Live at the Jazz Standard. Rene Marie raises the bar for her labelmates and, indeed, all jazz vocalists.