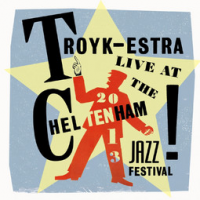 UK trio Troyka have made significant and idiosyncratic progress with each successive release since their eponymous debut [Edition 2009] and its classic follow up Moxxy [Edition 2012] which added angular post punk guitar shapes to the signature mix of impressionistic keyboard, heavy guitar and prog influenced time changes. Great though both those sets were, nothing therein quite prepares the listener for the inspired madness of translating them to the trio's alter ego, the orchestral behemoth Troyk-estra at the May 2013 Cheltenham Jazz Festival.

The concert was broadcast by the BBC's 'Jazz on 3' programme whose exemplary support for live music, coupled with the infectious enthusiasm of regular host Jez Nelson, have given many jazz/improv artists a national outlet for their music that is particularly valuable in these times of economic austerity. UK jazz fans will also know that BBC involvement means the underlying quality of this live recording will also be first rate, and the mastering from Impossible Ark records capitalises on this further opening up the music now freed from the compression requirements of modern digital and internet radio.

And what music it is—five of the seven tracks are reworked from the two studio albums, their names playfully concealed in anagrams of the original titles (eg "Noonian Soong" becomes "Gain Noon Soon," "Dropsy" and "Chaplain" become "Dry Ops" and "Hip Clan" respectively). The addition of the orchestra has a galvanising effect, adding power and space to the original compositions—so "Braze" (Moxxy's "Zebra") gains in swagger and dynamic breadth what it loses from the power chords of the original. It all feels incredibly well balanced though—whereas in the original versions the smaller setting meant that one musical element would almost inevitably predominate, here the large ensemble acts as a counterweight, accenting different elements of the compositions. For example the way that the keyboard underpinning on "Gain Noon Soon" is balanced by orchestral warmth, power and extraordinarily tight changes in tempo from the large ensemble gives it a more whole, expansive, feel that is completely exhilarating.

Better still are the two pieces that did not appear on the studio collections. Personal favourite "Coley" is led by a deft, bright, horn riff that fairly zips along. "Elegant Her," which the BBC did not originally broadcast, starts off like Miles Davis' "He Loved Him Madly" before building to a swampy climax that sounds like it may have completed the original show. Both of these tracks hint at more to come from this ensemble, and it would be fascinating to hear what they might do given time and a good quality studio.

Ultimately it is this talent for the unexpected which makes Troyka, in whatever guise, so precious. That they could pull off a move as audacious as this so convincingly augurs well for the scheduled gigs in early 2014 and clearly makes them ones to watch in British jazz in 2014.