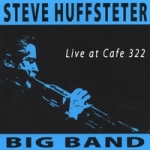 The cat has been released from the bag. Trumpeter Steve Huffsteter's big band, for years a well-kept secret beyond its home base in Southern California, has at last introduced itself to the rest of the country (and the world) via Live at Café 322 (in Sierra Madre). Huffsteter, who long ago validated his credentials as one of the Los Angeles area's leading composer / arranger / trumpeters, has kept the band working, at least sporadically, since it was formed but hadn't seen fit until now to document its prowess (a previous version of the band recorded a somewhat informal DVD, Gathered Around, that was released on AIX Records about three years ago).

Live at Café 322 embodies eight of Huffsteter's original compositions, three of which ("Moacir, "3 ½, "A Waltz and Battery ) were also included on the DVD. The album opens with the cleverly named "4 Miles, which could be read as an area on a map, the distance to the nearest pub, or, more likely, as a tribute to another well-known trumpeter, surname Davis, a supposition that is evidently borne out by Husffsteter's Gil Evans-style chart and Miles Davis-inspired muted trumpet. Tenor Jerry Pinter adds persuasive commentary on the breezy "Moacir and seductive "Slo Flo.

"Soul Foo Yung, the session's longest track at 10:10, is, to me, the least rewarding as well, owing not to its likable Oriental theme but to largely turgid and desultory solos by tenor Doug Webb and soprano Rick Keller. Keller fares better on "Astral Glide and "3 ½, on which he plays alto sax, not soprano as stated on the jacket, complementing dapper solos on the latter by trombonist Andrew Lippman and guitarist Jamie Findley. Drummer Dave Tull sounds a tad heavy-handed, especially on "3 ½ and "Soul Foo Yung, but others may find him perfectly acceptable, as tastes do vary widely.

"Dream Waltz, a sensuous charmer, is enhanced by Mark Massey's expressive piano and Pinter's supple tenor, while "A Waltz encompasses lucid remarks by trombonist Les Benedict, bassist Chris Connor and Webb, who seems more at ease on soprano. Huffsteter, who is apparently modest to a fault, doesn't list his solos but takes at least two, on "4 Miles and "Moacir, the last on flugelhorn. The concert is well-recorded, and the only audible flaws noticed, quite early on in "Astral Glide, were insignificant. The playing time is a respectable sixty-two minutes plus.

As noted, Huffsteter's band has been an audience favorite in Southern California for years, and now everyone else has a chance to hear and assess what has captivated its legion of staunch admirers. Live at Café 322 paints a fairly accurate portrait of the ensemble in a concert setting, one that should help spread the word that its excellent reputation is on the mark and well-deserved.