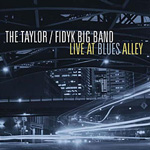 Here's a second impressive album by the outstanding Taylor/Fidyk Big Band, in every respect a worthy successor to its superlative studio date, A Perfect Match, from three years ago. The same basic ingredients—exhilarating charts by co-leader Mark Taylor, inspired blowing by the ensemble—are amplified this time around by the adrenaline rush induced by the presence of an audience at Blues Alley in Washington, DC.

As before, the band is comprised largely of Army Blues, Airmen of Note and Navy Commodores in civvies—and it can't get much better than that. Fidyk anchors a smokin' all-Blues rhythm section (Tony Nalker, piano; Jim Roberts, bass), and the band boasts not one but two remarkable lead trumpeters, one each from the Blues (Liesl Whitaker) and Airmen (Brian MacDonald). To underscore its kinship to the earlier album, three of Taylor's original compositions—"Full Count, "Brush Taps, "The Gorillaman Blues — reappear on this one. Ordinarily, that could be a sticking point, but it's refreshing to hear these splendid charts performed in concert and compare them with the studio versions, which vary in specifics if not in temperament. For example, tenor Joseph Henson duels with Tedd Baker, not Luis Hernandez, on "Full Count, while trombonist Matt Niess replaces baritone Scott Silbert as a soloist (alongside growling trumpeter Graham Breedlove) on the muscular "Gorillaman Blues, which opened the earlier album and closes this one.

Silbert, the lone Navy Commodore on the duty roster, has his own seductive showcase, "My One and Only Love. Nalker is featured on Irving Berlin's "What'll I Do, trombonist Jim McFalls on Herbie Hancock's "Maiden Voyage, alto saxophonist Bill Linney on Stevie Wonder's pop hit, "My Cherie Amour, Fidyk (with trumpeter Craig Fraedrich) on the gently understated "Brush Taps (co-written by Taylor and drummer Louie Bellson). Besides the tunes already mentioned, Taylor wrote the buoyant "Bradley's Bop House (dapper solos courtesy of Fraedrich and Baker) and arranged everything save the upbeat anthem "When Johnny Comes Marching Home, scored as a towering home run for Fidyk on his first turn at bat. Bassist Roberts is formidable here, as he is throughout the album.

The unsigned liner notes pay homage to recording engineer Bob Dawson, and for good reason. I've heard more than a few studio sessions that weren't as well-recorded as this. The balance, shadings and dynamics are such that the band could be playing in one's living room. But no matter what the venue, this is one of the finest big bands you're likely to hear in this or any other year. Those who've enjoyed A Perfect Match won't need any prodding from yours truly to check out its charming sequel, Live at Blues Alley.

About The Taylor / Fidyk Big Band