By NENAD GEORGIEVSKI
January 29, 2021
Sign in to view read count 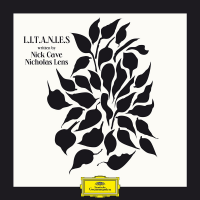 All music has a presence, but there's a certain level of respect saved for works that prove their value by surrounding, engulfing, and perhaps even altering listeners. The opera titled L.I.T.A.N.I.E.S, which is a second collaboration between Belgian classical composer Nicholas Lens and singer and composer in his own right Nick Cave, captures a specific mood that makes this collaboration distinctive and rewarding. Conceived during the first lockdown in 2020 when the planet was on standstill, Lens contacted Cave to write 12 litanies which he then put into a "modest chamber opera of sleeping dreams." The early stage of the lockdown had emptied the streets worldwide and imposed stillness and quiet. While riding the bike across the empty streets of Brussels, Lens had an epiphany and that this quietutde reminded him of the stillness he had felt in rural Japan at the Rinzai Zen temples. At the time, Cave's 2020 world tour with the Bad Seeds in support of his masterpiece Ghosteen (Bad Seed, 2019) was initially postponed for 2021 and eventually was canceled when 2020 ended, so an invitation arrived for a collaboration at the right time.

The result of this collaboration is music that is achingly gorgeous with its heartbroken melodicism. As Nick Cave described it: "Over the next week I wrote Nicholas twelve lyrical pieces that tracked the birth, blooming, fracturing and rebirth of a human being—petitions to a divine maker demanding some sort of cosmic acknowledgment and finding it beautifully rendered in the gorgeous music that Nicholas composed." Lens has opted for elegantly arched and flowing phrases and the music feels uncomplicated and meditative. There are long, held notes, repetitive phrases, strings that are working their way through the chord progression, note by note, and vocals that are simply disarming. The elements that constitute the compositions are remarkably simple, but it's the way they are layered and textured that makes the music so vibrant and alive. The music concentrates on the space between the notes as much as it does on the notes themselves. What matters so much is not only the substance of the music as the way it was all put together and the ways the composer understands timbre and what it can suggest.

Cave is a complex man of dark humor, wit, and drama, and his own output shows that. But he is also capable of reaching enormous emotional depths. His work is rich with emotion, tenderness, and beauty. His words are haunting and deeply evocative and are sewn into a fine tapestry of Lens' harmonies and melodies. While he isn't singing in this opera, his words evoke a familiar feeling that is recognizable from the Bad Seeds' last phase starting from Push the Sky Away (Bad Seed, 2012) until Ghosteen.

The opener, "Litany of Divine Absence," quickly immerses the listener in both artists' musical vision. Built on layers of strings, it's a hugely atmospheric and emotional piece. "Where are you? Become yourself, so I can see you" vocalist Clara-Lane whispers, and these words seem to almost arrive from the dark night of the soul. Cave is one of the world's most dazzling lyricists and can come up with lines that are completely disarming. If there is any unifying theme that binds these twelve litanies, it is the protagonist's relationship to life and death and how he or she embraces or flees from it. L.I.T.A.N.I.E.S is a thoughtful, honest, and deeply felt exploration of what it means to be a feeling, caring human in our time of incessant gaslighting in a post-fact era.