By RICK BRUNER
December 1, 1997
Sign in to view read count 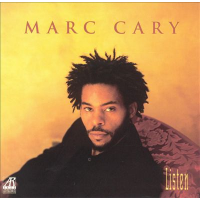 Marc Cary's credentials are impressive. He has been in the bands of Arthur Taylor, Betty Carter, Roy Hargrove and currently is a member of Abbey Lincoln's group. One would expect good things from a musician who has been called upon by these greats and all expectations are met on this fine release.

From the opening notes of bassist Billy Johnson on "Runnin' Out of Time" to the final rustle of percussion on a reprise of the tune, the music is nothing less than top notch, beautifully arranged, passionately executed music. You might not recognize all the names of the artists but you will want to hear more from them after one Listen. You might recall Terell Stafford's fine trumpet work from his tenure with Bobby Watson's Horizon group. Ron Blake has a dark, fat tone on the tenor sax. He is featured prominently and I found myself admiring the influence of Charlie Rouse apparent in his sound. Many of the ensemble passages are arranged for trumpet/sax/flute, a stunning combination to express Mr. Cary's sublime harmonies. The rest of the band (Charles Laws on flute and percussion, Dion Parson on drums, and Daniel Moreno on percussion) demonstrates taste and fire in abundance.

Mr. Cary's own playing is fluid and driving and his compositions are interesting and varied. There's the boppish "Fallacy" and the double-time percussion percolating beneath the half-time melody line of "New Blues," as well as some cooking swing on "Mr. Lucky." There's also "Throw It Away," a tune from Abbey Lincoln, featuring some darkly lyrical tenor sax and piano solos over a dancing Latin groove.

Listen is a solid swinging effort from an excellent group. Dig this release and let's hope to hear lots more from Marc Carey in the near future.