By JEFF DAYTON-JOHNSON
August 11, 2007
Sign in to view read count 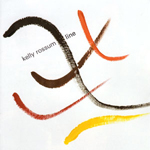 Those listeners who know Kelly Rossum only as the self-styled "electrumpet" virtuoso from Electropolis (Innova, 2006), by the Minneapolis group of the same name, will be surprised by Line.

In contrast to Electropolis' deep-groove, sci-fi jazz, Rossum's band here offers an entirely acoustic combination of the sounds of those marvelous, piano-less "New Thing" groups circa 1967, and Tim Berne's fearless experiments circa 1987, which winds up sounding like the perfect jazz for 2007.

The disc is built around the framework of five short, numbered pieces ("Line I" through "Line V ), each featuring one member of the band, and, in the middle of the set, the full-length, unnumbered "Line." On these tracks, the juxtaposition of the pleasingly outside soloing and the free-ranging, but metrically disciplined rhythm section brings most keenly to mind the groups of mid-60s pioneers like Archie Shepp.

Rossum's playing, here and elsewhere, likewise shows flashes of the influence of Don Cherry, Ted Curson, Alan Shorter, Lester Bowie—masters all, of the exploratory sound of the era.

In his discursive solo feature on "Line II," tenor saxophonist Woody Witt stands out as the freest of this strong cast of players. Bassist Chris Bates, meanwhile, plays a critical role in holding together the loose-limbed sound of the ensemble; his sound is elastic and spacious, present but not obtrusive.

From Berne in the 1980s (or equally well from any one of a hundred other possible influences), Rossum has taken careful, lovingly developed ensemble arrangement and composition ideas, and an exaggerated dynamic contrast between the piano and the forte—the driving and the dreamy. "Sand Dunes" is a case in point, in which Witt's aggressive solo builds tension over a steady beat which ultimately cedes to a tempo-less quiet. On the other hand, in the solo-less "Sitting on the dock looking at the stars," the tension is between the long, serenely lovely melodic line and the insistent pulse.

If the long lines of the compositions tend to a sort of earnest intellectualism (most notably on the title track and the very quiet "Places of the Mindful"), any arid abstraction is avoided in practice by the contribution of soulful elements in the writing and playing, as on the sentimental, Mingus-like ensemble figure of "Seduction."

This is uncompromising, well-rounded modern jazz, carefully prepared, but fresh and spontaneous in its execution.