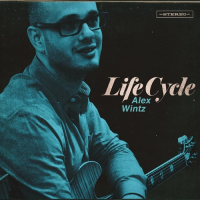 Life cycles mark and determine how we develop, where we travel, and why we arrive and thrive in different places, figuratively and literally, at any given time. That's the point that guitarist Alex Wintz's music makes here, as this project takes its cues from the larger natural theme while growing specifically from his own personal and musical evolution of late. It's a work that couldn't be made at any other moment, as it specifically reflects Wintz as he is today, or, more accurately, as he was when he recorded the album in January of 2016.

While many have come to know Wintz through his sideman work with trumpeter Etienne Charles, bassist Ben Williams, and a variety of other leading lights on today's scene, he's a rising star in his own right. These nine tracks, ranging in temperature from pleasantly warm to burning hot, easily make that case, highlighting his crisp guitar work, conversational openness, interpretive skills, and compositional acumen. He delivers swift and articulate lines as he moves through heads ("Action/Reaction"), patiently builds scene-stealing solos that raise the bar for his accomplished colleagues ("Seeing Distance"), brings a steady-handed and clear-headed beauty to classic material ("I Don't Stand A Ghost Of A Chance With You"), navigates bends in the road like an ace race car driver ("Life Cycle"), and brings an understated atmosphere into clear view ("The Low Country").

There's tremendous maturity to be found here, both in Wintz's judicious displays and in those of his colleagues. There are certainly moments here to smile and appreciate chops and/or extroverted thoughts—a small sampling includes the string of solos that introduce the band ("Action/Reaction"), drummer Jimmy Macbride's showstopper showcase ("Taking Sides"), and Wintz's bluesy banter ("Shared Stories")—but band empathy trumps individual showboating time and again on this one. The concept(s) for group and song prove to be of prime importance to Wintz, essentially serving as his acknowledgement that fine music doesn't form in a vacuum or put any individual above another. Strong performances develop through rapport, conversation, and hard work, all of which is evident throughout this enlightened album.