BY TRISH RICHARDSON
October 7, 2008
Sign in to view read count

Jazz is a language; first comes the hearing, then comes the speaking.

"I'm not sure but I think all music comes from New Orleans."

While New Orleans may not be as popular as some of her sisters to the North, her personality and charm are second to none. She is as diversified as the people who live within her boundaries. Though she is indelibly linked with the unwanted visits from her ill-mannered and tempestuous cousins Katrina, Rita, Gustav, and Ike; she has proven to herself and the world that she is tougher than most. Whether times are hard or happy, joyful or mournful, she always has a song in her heart that she is willing to share. Not to mention, this is one lady who knows how to party.

Jazz trumpeter, vocalist, and New Orleans native Leroy Jones takes after his "mother" in the best possible ways. He's charming, generous and kind and has the gift to musically move you from tear-in-the-eye emotion to dancing in your seat. Jones also has the optimistic attitude of many New Orleans residents. He seems to look on the bright side of things, even the humid late summer weather. He wouldn't say the weather was bad, just hot. "You all have no idea what summer is," he laughs. And Jones definitely knows how to have fun, Big Easy style. His joy and passion during a performance is contagious even to the stodgiest among them.

Although Jones was born and raised in New Orleans, he has traveled and performed all over the world. So just what is it about New Orleans that keeps him there? "I think the main reason why I've chosen to keep New Orleans as my home base is because if I ever decide to stop going on the road, New Orleans is one of very few cities in the United States, even perhaps in the world, where a musician can earn a living from just playing music. New Orleans' economy thrives on tourism. So there will always be a market for entertainment and usually within the genre that has made the city famous. And that musical genre is jazz. Not to mention, New Orleans has a vibe and a cultural spirit that is unique." 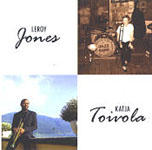 He explains, "I think the main reason for that is that basically the music was nurtured and developed in New Orleans going back to Antebellum Times, Congo Square. There the Africans were allowed to practice their rituals, their musical rights, playing their rhythms in the square itself. This was happening in a section of the country during that time where it didn't happen anywhere else."

According to Jones, there have been some, but not many changes to New Orleans jazz over the years. He says, "There have been subtle changes within the brass band genre. The music has taken on more of a contemporary twinge to it but you can still hear the remnants of the traditional sound. It's still traditional but it's more contemporary because the bands are now incorporating more pop repertoire. Pop in the sense of the popular music of today. They're not playing the old hymns and the marches like the brass bands of a hundred years ago. Yet you can still hear underlying that particular sound that makes it New Orleans brass band music. So there have been some subtle changes to the sound. I would say for the most part it has been within that sort of genre of music, the brass band music, New Orleans brass band music."

So it would seem that the core of it has been the same now as it was a hundred years ago? "Oh, absolutely. Absolutely," Jones replied. "And again, you will recognize that as New Orleans music because you will not hear it like that anywhere else in the world."

Though Jones' professional career began before he was fourteen years old, many have been introduced to Jones' music by his New Orleans brother, Harry Connick, Jr. Jones recalls the early days of his and Connick's careers: "We met a long time ago, I am a bit older than Harry—before he went up to New York to pursue his career. This was in 1985, just before I went off to Southeast Asia [to perform] and I was still working at a club on Bourbon Street called Mahogany Hall. Harry stopped by and said 'hi' and sat in on the piano with us that night. We talked afterwards on the break and he said he was going up to New York to pursue his career. I think he had a gig at a place called the Knickerbocker in New York, which is a bistro where he played solo piano."

"The next thing I knew I saw him on Dateline with Larry King—he and a bassist from Portland by the name of Ben Wolfe. They were doing a duo gig and there was all this hype about a movie that had just come out called When Harry Met Sally (1989). After that, the motion picture hit and the music was really nice. Harry got quite a bit of exposure, which prompted him to form his own big band during the summer of 1990. I'd say the most memorable moment meeting Harry would have been during that time, in New Orleans, in 1985, before he went up to New York."

Jones has since gone on to have a solid, successful career on his own and as well as with Connick's big band. Jones' solo trumpet performance of "What a Wonderful World" is, quite simply, unforgettable. The sound of his trumpet wraps around the soul like a favorite blanket, wishing for nothing else from the moment but to hear more. And then there is Jones' voice—rich and warm and a wonderful complement to his trumpet. 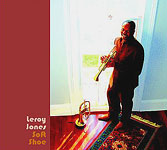 However, Jones doesn't label himself a singer. He says, "I am a musician first and a trumpet player by far. I don't call myself, or I should say I don't consider myself, a singer. I've never spent any time taking vocal lessons nor do I have any specific routine for exercising that instrument other than when I might sing a particular song when performing or recording. Because I play a wind instrument and have learned how to use my diaphragm, vocalizing has become almost second nature for me."

He adds, "I've never really sang as a soloist, a lead singer until 1978, when I had a gig on Bourbon Street. I worked with a jazz band and no one else in the band sang so they put the monkey on my back. It was cool."

"It's nice to sing and I think you can get a point across more," Jones continues. "People relate more to vocals than they do to instrumental music. Instrumental music and recognizing an artist who is performing on a musical instrument requires a little more acute understanding of music. Every instrument, even if someone plays the piano, his or her touch is different so it sounds like a different person on the piano. They play different ideas. With wind instruments, the tone is different. It is the same thing, if you sing or you play an instrument, you use an instrument, as a tool to express yourself as well as your voice becomes an instrument when you sing to express yourself. It's the same person so it's the feeling according to how developed the person is on the instrument or how developed the voice is. It's pretty much going to be that same individual that you are going to hear, no matter what instrument that application is coming from."

A conversation with Jones includes much more than talking about music. He is also a historian, teacher, writer, and business advisor. In addition, he has recently added producer to his already crowded musical resume, wrapping up a project with Japanese singer Kasumi Kawamura, also known as Noon , on a CD called Walk With Thee in New Orleans (JVC Japan, 2007).

If Jones had to choose a career other than performing, he knows it would definitely be something related to music. He thinks he would continue to write music or perhaps, teach. On teaching, Jones says, "You really can't teach someone how to play jazz. You can only direct them in the direction they should go and then tell them what recordings they should listen to. Jazz is a language; first comes the hearing, then comes the speaking. Improvisation has many dialects. So you choose which dialect you want to 'speak.' You try to master that one best you can and if you can speak in other dialects, that's all to your benefit. Modern idioms, more traditional idioms, free jazz—those are all different dialects of playing what you choose to play as an improviser. But you have to be true to your art and play the music that you love because then it will be sincere. That's what gets across. People feel that when they hear a musician play."

He has chosen, along with wife and fellow musician Katja Toivola to manage his own career. Jones realizes the benefits to being managed by someone else: "It's great when an artist has a management team, booking agent, publicist, etc., because those aspects of the music business are usually a full-time job. Enough work goes into daily practice routines, rehearsing, composing and arranging. Having the luxury of a good manager allows the artist more freedom to be creative. When an artist is signed with a record label, then management, booking agents and publicists are attached."

Despite that, Jones and Toivola have chosen to manage his career together. "My wife is a great help to me, but she is also a musician, so we are doing a lot of things together and separately." He adds, "Katja and I are independent recording artists. So we must do those other jobs, as well as try to nurture our crafts. The pros are that you can be sure things will be done in the manner that you desire, without sharing the profits with any middlemen. The cons are that you can often get burnt out trying to do everything and this can sometimes cause your craft to suffer."

He advises up-and-coming musicians to remember that there's just as much business to the music business as there is music. "The audience basically sees the glamorous side of it. They don't see you when you when you're jumping off a plane or jumping off a bus at 6 AM after you've had three hours of sleep. You go from the hotel, to rehearsal and sound check, [perform], and then move on to the next place. It comes with the territory. I say if you don't want to be involved with it, do something else. But I wouldn't give it up for anything."

Jeremy Ryan, Gettin' Back Down to New Orleans (Self Produced, 2006)

Leroy Jones, Wonderful Christmas: A Brass Salute To The King Of Kings (Self Produced, 2003)