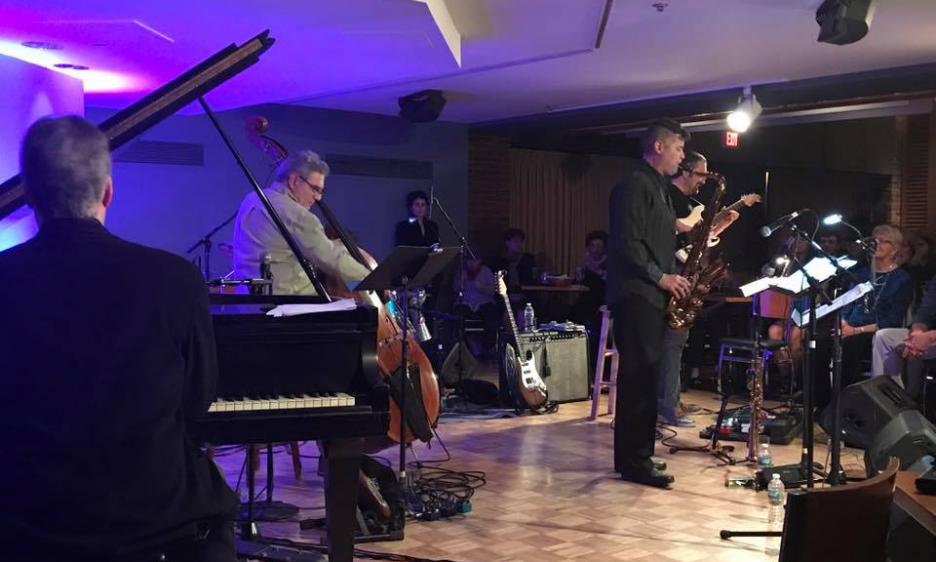 During the creation of Lello Molinari's current release Lello's Italian Job, Vol. 2(March, 2018) the renown jazz bassist was intentionally stepping back to his roots of southern Italy, specifically Naples—which he left in 1986 to study at the Berklee College of Music, in Boston. In Lello's own words he empathized, "If you think about Italian music, it's like saying 'Jazz'—there's so much and it's so diverse that it's impossible to put it into one place." In his recent recording Lello's Italian Job, Vol. 2 and particularly his performance Tuesday evening, May 1st at the Regatta Bar in Cambridge, he succeeded tremendously in evoking an exploration of Italian music and culture.

The concert that evening included the same musicianship from the recording( with a few exceptions) which helped Lello mine his rich Italian musical heritage, with exceptional accompaniment for inspiration. A stellar show of quality artistry on each instrument included performances by saxophonist Dino Govoni, guitarist Sal DiFusco and drummer extraordinaire Marcello Pellitteri. Special guest Frank Carlberg joined the band on piano to meld some wonderfully rich tones and embellishments to each composition. Lello commanded the band, an acclaimed bassist, bandleader and teacher(Berklee College of Music) but also let them freely improvise as needed to showcase individual talent and extend the quartets interpretations of several Italian standards and some more traditional jazz selections.

The intimate setting of the Regatta Bar played well into the hands of Lello and performances by each musician. Clearly the band was very much in their element, a nightclub environment surrounded by a small audience literally at the edge of the stage and totally engaged. Nothing from the mood to the musicianship was lost. Family, friends and other musicians from Berklee College of Music were present in support. Berklee instructor, musician(saxophonist) and international sessions player Marco Pignataro joined the band for a melodic, soulful solo and then a two instrument-part piece with just Lello accompanying on bass, while the audience fell silent to appreciate the interplay between each instrument.

The Italian heritage was deep in the group's relationship as well, as this well-honed quartet shared their bandleader's roots as well. Drummer Marcello Pellitteri is also a fellow immigrant, hailing originally from Sicily, while saxophonist Dino Govoni and guitarist Sal DiFusco are both Italian-American. Their repertoire varied from a Respighi tone poem to popular Neapolitan songs that have been sung for generations, to original music penned for this project. Cuts from current release were embellished upon by individual soloing, but all deeply resonated Lello's love for his homeland. Renditions included "O'Sarracino," "Jazz Tarantella," "Na Tazzulella e Cafè," "Sulla Strada Per Damasco," "Anema E Core," "Torna A Surriento," "Malafemmena" and "Libiamo Nei Lieti Calici."

Beyond the "Old World" Italian-seed, there were also stand-out moments for featured musicianship that included even some bee-bop influence to jazz-rock fusion. Dino Govoni raced fluidly up and down the keys on his tenor and soprano sax, while Sal DiFusco ripped blistering jazz scale leads on his electric guitar. Always driving the backbone with inventive riffs on drums was the extraordinary talent of Marcello Pellitteri. Closing the set by pre-announcing the encore, Lello Molinari reminded his musicians that the final piece was an "abbreviated" version of an original, having allowed for an evening of free-form improvisation that took the set past 1 ½ hours. The audience was in no rush, and Lello Molinari's smile and thanks for the evening's enthusiastic crowd was returned by an extended round of applause.