By PHILLIP WOOLEVER
April 7, 2020
Sign in to view read count 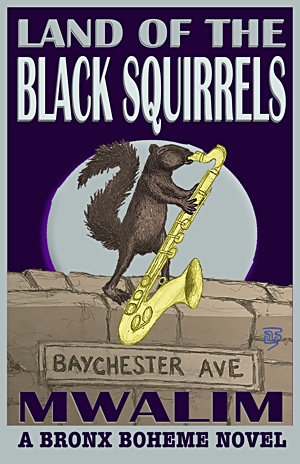 In these days of pandemic pressure, it's increasingly obvious that books are a very effective method of dealing with self-isolation symptoms like boredom, frustration or depression. The smoothly-paced Land of the Black Squirrels (Thirty-three Pages, 2020) provides fictional urban scenarios centered by characters in the music and arts industry, including numerous jazz-based references.

This is the first installment of a "Bronx Boheme" series by a newly established publisher with the goal of creating "a forum through which writers of color could share their unique perspectives and social theories." This book does an excellent job of fulfilling that purpose, providing vivid examples and anecdotes from life in the Bronx during the 1980—'90s era in which most of the narrative unfolds. The author Mwalim, an accomplished performer, musician and writer, is an associate professor of English at the University of Massachusetts-Dartmouth, where he was previously the director of Black Studies. There are quite likely many autobiographical reflections in this tale, adding to a consistent sense of realistic perspective, sociological history and whimsical asides. This excerpt from Chapter Two involves primary character Calvin "Obatunde" Bey taking giant steps in his personal and professional life. It was typical during a gig that the audience would change like the tides, but Vivian convinced her date to stay for all three sets. During the break, The B Man went to get Oba some water and himself a scotch. As Vivian's date went to make a phone call, Oba took the opportunity to go over to the table and introduced himself. It didn't take too much convincing for her to agree to ditch her date and grab a late dinner with him at a spot on 127th Street and St. Nicholas.

Vivian Brown was a student at Hunter College studying early childhood education at the Bronx campus. She wanted to major in English, but her father said she needed a practical major. Around 3 a.m., Oba got them a cab and took Vivian to her parents' house and made sure she got in okay. Then he took the White Plains elevated train back to Harlem and walked the nine blocks to his apartment, just as the sun began to come up. At the time, Oba was living in a studio apartment in Harlem, furnished with a full-sized day bed, dinette set with two chairs, an easy chair, little television, stereo and phonograph, and bookshelves filled with books and hundreds of jazz, Latin, and African drumming records.

A few of these items were from his mother's old apartment that he hadn't sold or given away. His mother had always told him, "People hold onto things because it reminds them of people who are gone, and they miss. They are just things that become clutter and a burden." Oba also had his trap drums and congas set up in one corner, along with an upright piano (that came with the apartment), and he often hosted rehearsals and jam sessions. In the other corner, he had set up his art studio where he kept his paintings and new projects under the skylight. The other tenants of the building were mostly musicians, artists, hustlers, and/or hookers.

Oba made dinner for Vivian the first time she came to his apartment: spaghetti and meat sauce with garlic bread and salad. The romantic meal was topped off with Manischewitz Grape Concord, a wine they both liked. For Vivian, it was a familiar holiday table wine in her family's home. For Oba, it was the favorite brown-bag wine of the late-night-on-the-corner-crew that he had grown up with, the preference of true wine corner sewers everywhere. They played chess, listened to records, and Oba borrowed Chappie's car to drive her home. One night, Vivian came over and made dinner for Oba. They played chess, listened to records, and she stayed for the weekend. The Browns thought that Vivian was at her friend Valerie's house.

Vivian had become such a regular and frequent visitor to the apartment that by the end of 1962, Vivian was basically living at Oba's. She had now transferred to the Manhattan campus of Hunter to finish out her undergraduate degree, so Oba's place was closer to school. Her parents explained to their friends that she often took care of her beau's apartment because he is out of town, working all of the time. The Browns began to notice other changes in their daughter, besides not coming home for days at a time. Her clothing style became a bit more 'ethnic," with flowing, robe-like, print dresses; she cut her hair and let it grow into a natural; often wearing a turban. She also began reading books that she procured from Oba's shelves.

One time, her father did a spot inspection of her room, looking to see if she was taking drugs. Instead, he found books: The Little Red Book; Quotations of Chairman Mao; various books by Franz Fanon, Alaine Locke, Elijah Muhammad, Noble Drew Ali, Langston Hughes, Henry Dumas... and Gwendolyn Brooks, Allen Ginsberg, LeRoi Jones, and copies of poetry magazines and other pamphlets. Her dad actually liked some of the poetry, as at one time he wanted to be a novelist. He even had a few drafts of the first few chapters in a box somewhere. During his inspection, he also came upon a paper that Vivian was writing for a class explaining that the word "woman" and "women" were incorrect, and like the term "female," supported the fallacy that womyn were born of men, otherwise called the "Adam's rib theory," and therefore the proper spelling for either should be "womyn." After reading this nonsensical gibber-jabber, Mr. Brown was convinced that his only child was on drugs. To his chagrin -and during the holiday season, no less-Vivian and Oba announced their engagement. The B Man had returned to Europe and Oba and Chaka kept playing the tri-state jazz scene. Chaka was a pianist who was into playing a style of jazz built over R&B tunes, often from popular Motown and Stax records. He'd start with the familiar grooves and melodies, moving them into a new realm adding poly-counter rhythms and modal harmonies. One October night, Oba and Chaka had a gig at the Lenox Lounge. During the intermission, The B Man popped up out of nowhere, inviting Chaka and Oba to go on tour with him. It would be a five-month gig and paid $800 a week, starting in December. With bread like that, Oba could move into a bigger space with Vivian as well as cover their bills.

"Five months?" seemed to be the only part of the news that Vivian absorbed that night, after her man had bounced home and excitedly told her about the gig. Her hazel eyes seemed to look right through him until they welled up with tears. Oba tried to reason with her. This would mean a bigger place up in the Bronx near her parents... it would mean furniture, and food, and... "It will mean that you'll be away from me for five months," was her tearful response. They were married on September 13th, 1964 and Oba left for London as a part of The B Man's 7 on December 26th.

With Oba on the road, Mr. Brown used this as an opportunity to move the couple out of Oba's room as he called it (it was really a studio apartment), and with the help of a couple of other friends, Mr. Brown moved Vivian and the contents of Oba's apartment to the recently vacant, three-bedroom apartment upstairs at the Brown's house in the Bronx. The contents of Oba's entire apartment almost fit in one of the bedrooms of their new apartment, Vivian noticed as she set up his bookshelves and art studio. Mrs. Brown was in the process of redecorating and gave a lot of their old furniture to Vivian and Oba, including a beautiful couch and dining room set.

Meanwhile, the tour took The B Man, Chaka, Oba, and a bassist named Francois to England, Germany, France, and Amsterdam. The B Man had been living in France from the late 1940s through the '50s and was still living there part-time in the 1960s. They were performing at the Caveau Huchette the night of Malcolm X's assassination in 1965. The B Man recalled Malcolm from his Detroit Red days when he was a regular in a lot of the nightclubs, bars, and pool halls around Harlem. Later -when visiting the States in the 1950s-he ran into Malcolm; but this time, Malcolm was dressed and groomed very differently, standing on a soapbox on the corner of 125th Street and 8th Ave, preaching to the people about the evils of the white devil. "I could have told him that and he wouldn't have had to go to jail or give up pork to find out," mused The B Man in a cloud of smoke from his Raleigh cigarette.

April finally came and Oba was now back in New York, getting ready to settle into married life with his new wife, in their new home, and a talk with his new father-in-law in his father-in-law's den. As a Duke of Iron calypso record played in the background, Mr. Brown gave Oba a lecture on family life and responsibility and the need to make choices and sacrifices for the whole. Illustrating his point, Mr. Brown told Oba he got him a job that would provide a steady income and allow him to play out and around on the weekends... and even some weekdays because he could set his own hours.