By DAN BILAWSKY
November 11, 2018
Sign in to view read count 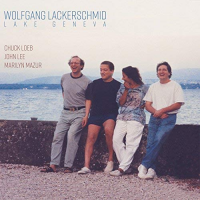 Sometimes, scenery just begets beautiful music. In the summer of 1995, vibraphonist Wolfgang Lackerschmid found himself in an idyllic setting on the shores of Lake Geneva. He was there with guitarist Chuck Loeb, bassist John Lee, and drummer-percussionist Marilyn Mazur—a super band of sorts that was assembled for a one-off recording session—and that foursome couldn't have asked for a better working situation. Put up in style for a week, the quartet enjoyed spending time on the lake, indulging in quality cuisine, and, of course, recording some music.

The end results of said collaboration—ten tracks, long obscured by circumstances—speak to a blending of substance and style, indebted to the strengths of all parties while still managing to speak to the give-and-take that automatically accompanies the marriage of singular elements. Whether sending the album on its way with Lee's fusion-forward "Spirits Rise," calling on soothing spirits with Loeb's "The Ninth Step," swaying to and fro on Lackerschmid's bossa-tinged "Wedding Gift," or playing to atmospheric grace on Mazur's "Sospejvlet," these four allow themselves to be subsumed within a greater whole while also managing to make their respective marks.

Rather than strongly compelling the ears into any realm, much of this music tends to make its mark by seeping into the soul. Numbers like the starlit "Cabeca Feita," touching "Our Sweet Love," and wistful "Bells" take an easygoing approach that finds favor through subliminal means. The program isn't devoid of heat—in addition to the aforementioned opener, check out the earthy and sinuous "Funky Alex" for proof—but those rises in temperature are few and far between, and they never reach full boil. In truth, the album is all the better for that fact. Sheer pyrotechnics would have spoiled what these four put together during that blissful week in the sun.