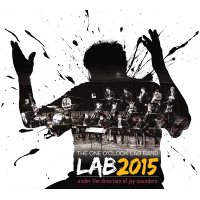 Jay Saunders, director of the University of North Texas' flagship ensemble, the One O'Clock Lab Band, sums up the group's latest recording, Lab 2015, in one concise and canny sentence: "Sometimes it's best just to let the band play what they want to play." With that in mind, Saunders writes in the album's liner notes, he "threw the keys" to the band, its arrangers and composers and told them "to write anything they wanted." From twenty-three submissions, the members of the ensemble chose the ones they most wanted to perform on the CD. The result is a series of nine superlative charts, half a dozen of which were written by current One O'Clock Lab Band members Drew Zaremba (five) and Garrett Wingfield, plus one each by jazz DMA candidate Aaron Hedenstrom, recent UNT graduate Kevin Swaim and professor of jazz composition and arranging Rich DeRosa.

One might think that the opener, Jerome Kern's venerable standard "All the Things You Are," had already been arranged in every conceivable way, but Zaremba manages to add his singular imprint, recasting the lovely ballad as a boisterous flag-waver with incendiary solos by trumpeter Daniel Matthews and tenor Mark Hartsuch and sturdy rhythmic support from drummer Connor Kent and percussionist Nick Rothouse. Zaremba arranged two more well-known standards ("The Song Is You," "Smoke Gets in Your Eyes"), re-scored guitarist Brad Kang's kaleidoscopic "Uncertainty" for big band, and composed and arranged the buoyant, happy-go-lucky "Pistachio." Wingfield contributed "Anthropoidea," Hedenstrom the modal "Out in the Storm," Swaim "The Other Side," DeRosa the warmhearted ballad "Neil," written for his friend, colleague and former One O'Clock Lab Band director Neil Slater and featuring pianist Sergio Pamies.

Alto Zaremba, trombonist Matt Corrigan, bassist Jack Helsley and Hartsuch are front and center on "The Song Is You," Matthews (flugel) and tenor Alex Fraile on "Smoke Gets in Your Eyes" (reframed as an alluring samba), while Kang shines on "Uncertainty," trombonist Joakim Toftgard, vibraphonist John Sturino and Zaremba (Hammond B3 organ) on "Pistachio." As its esoteric name implies, "Anthropoidea" skirts the edges of free jazz (without losing its form) before settling into a funk-rock groove over which alto Jonathan Mones improvises, prefacing a number of intriguing byways that lead to a conclusive brass chorale. According to Swaim, "The Other Side" was written to show the band "in a different light," a purpose that is well-served thanks to steadfast work by the ensemble and an impressive solo by baritone Wingfield. Again, drummer Kent and percussionists Rothouse and John Sturino play leading roles in its success. Needless to say, none of the Lab Band's soloists is less than admirable.

In a world of constant and ever-quickening change, it's comforting to know that some things remain invariable, such as the abiding excellence of UNT's One O'Clock Lab Band and its superb annual self-portraits.

All the Things You Are; Out in the Storm; Pistachio; Neil; Anthropoidea; The Song Is You; The Other Side; Smoke Gets in Your Eyes; Uncertainty.