By HRAYR ATTARIAN
December 3, 2012
Sign in to view read count 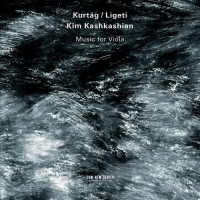 There are more jokes about the viola, perhaps, than any other member of the violin family, but there are also exquisitely written pieces of music that in the hands of virtuosos come alive with vivid emotion and erudite articulation.

Boston-based Kim Kashkashian is one of the premier violists in the world and has recorded many fine, edgy and stimulating albums. With Kurtág/Ligeti: Music for Viola, she tackles two of the more challenging composers of the last half of the 20th century: Hungarians György Ligeti and György Kurtág. The two men not only share a first name and a national heritage but also a common inspirational source, as both are intellectual disciples of their great countryman, Béla Bartók.

Kashkashian has dedicated a significant portion of her career in studying Kurtág's uniquely intricate body of work. This is her third Kurtág recording. The nineteen-part "Signs, Games and Messages," started in 1989, runs only half an hour and is considered a work in progress by its creator. Supreme adroitness, with which she is endowed, is not enough, to interpret successfully this evanescent and cryptic composition. This is where Kashkashian's deep sympathy and understanding of the Kurtag's oeuvre comes in. Her sublime approach to the demanding and unconventional harmonic and rhythmic changes make the score a living, evolving being.

She goes from deferentially and softly touching the strings on "Silent Lines to László Dobszay" to the almost dancing notes of the folk-inspired "Perpetuum Mobile." Her lilting sound beautifully illustrates the nostalgic mood on "For Imre Földes At 60." She also delivers, with subtle whimsy, the theatrical "Signs 1" and "Signs 2."

The more conventional, six-movement "Sonata for Solo Viola" shares its ethnic influence and idiosyncratic construct with "Signs, Games and Messages," but differs it in its solid character and musical heft. While Kurtág's work is ethereal, Ligeti's is earthbound.

Kashkashian's bowing is like a human voice, melancholically singing a folkloric melody on "Hora Lunga." She introduces the right amount of dissonance in the spirited "Loop," while coaxing a whole quartet worth of sound out of single instrument on "Fascar." She navigates the fast tempo of a modern tale of anxiety deftly and with grace on "Prestissimo Con Sordino," and expresses a gamut of emotions on the mournful, angry yet quietly reconciliatory "Lamento." She closes the album with muted tones and shimmering colors of the suite's sixth and last movement, "Chaconne chromatique."

An educator at the New England Conservatory of Music and a tireless advocate of the much-maligned viola, Kashkashian has delivered, once more, a resplendent record that not only explores the instrument's range and versatility but also introduces two ambitious yet surprisingly accessible gems.