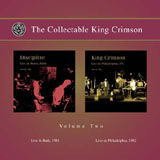 The second in a series bringing together some of the best live material from its nearly four decade off-again-on-again existence, The Collectable King Crimson Volume Two collects two shows from the art rock group's 1980s incarnation. As much as Volume One (DGM, 2007) was a stunning example of the sheer power and improvisational prowess of 1973-1974 Crimson, Volume Two provides a sharp contrast between 1980s Crimson's very first performance and a more polished set fifteen months later.

When founder/guitarist Robert Fripp decided to form a new group in 1981, it wasn't meant to be Crimson. He recruited Bill Bruford from the last Crimson incarnation—a creative percussionist who was able to blend viscerally compelling rhythm with detailed textural experimentation—for his new group, to be called Discipline.

Bassist Tony Levin had already worked with Fripp on the guitarist's Exposure (DGM, 1979) and Peter Gabriel's early solo albums, and was a player who could be both an unshakable groovemeister and front line member, especially on his Chapman Stick, a tapped instrument that brought pianistic breadth to an electric string instrument.

The first disc of this two-CD set comes from Discipline's very first show at Mole's on April 30, 1981. Mole's was a hole-in-the wall club in Bath, England that Fripp chose as a place where the group could experiment in performance without the pressures of greater exposure. From the first notes of the minimal funk of "Discipline" it became clear that this group may have abandoned the symphonic aspects of Crimson of old, but it still was unequivocally Crimson, albeit a manifestation that might even encourage its audience to dance—as long as they don't find themselves tripping over their feet in 21/8.

Taken from an audience cassette recording, the Bath performance is decidedly lo-fi. Still, the cleanup job makes it a very acceptable bootleg quality listen, and the energy and excitement of discovery that's clearly happening on stage is so compelling that it's easy to forgive and forget the less than stellar sound quality.

Aside from two 1970s tunes—the crunching "Larks' Tongues In Aspic: Part Two" and equally aggressive "Red," both proof that the words intelligent and metal can be used in the same sentence—the balance of the set is from what would ultimately become the group's debut as the new King Crimson, Discipline (DGM, 1981). But songs that would soon evolve into set list staples are heard here in germinal form, with significantly altered arrangements and Belew's lyrics still rough works-in-progress on songs including "Elephant Talk," "Thela Hun Ginjeet" and "Indiscipline."

The second disc, a professional recording from Philadelphia fifteen months later, sports far better sound, taken from the group's eight-track recording console. The material from Bath is heard again here too, but by this time the arrangements had arrived at their final form. Four tracks from Beat (DGM, 1982) flesh out the 75-minute set.

The arrangements may have been tighter, but Crimson night-to-night has always been a different experience. This edition of Crimson was the least overtly improvisational, but its stricter adherence to form doesn't mean performances were anywhere near identical or literal. Levin, in particular, is in outstanding form, taking far more liberties here than on the undeniably excellent Absent Lovers: Live In Montreal 1984 (DGM, 1998).

1980s Crim was a far more accessible band than those that had come before. Levin and Bruford made for a visceral groove team, but the intricate interweaving patterns of Fripp and Belew gave the music a depth that other bands from the time, like Talking Heads, simply lacked. Crimson circa 1981-1984 was truly a group for the head, heart and body.

The opportunity to follow Crimson as it evolves from its raw, experimental beginnings to more polished form is reason enough to consider The Collectable King Crimson Volume Two an essential listen. But it's also a flat-out good time and, when paired with Absent Lovers (one of this incarnation's final performances), it provides an informative and compelling history of one of Crimson's best-loved editions.