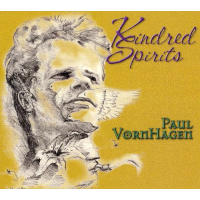 The opener on multiple-reedman/vocalist Paul VornHagen's Kindred Spirits, "Namely You," kicks the set off on a relaxed straight-ahead vibe, with the leader blowing a robust tenor sax lead. The sound feels loose, like Ben Webster—Ellington's most famous tenor saxophonist—playing out in front of a bunch of top-notch accompanists. Cal Tjader's "Mindanao," featuring VornHagen on flute, takes things into a more propulsive and urgent mood.

The surprise, after two great instrumental tracks, is Burton Lane's "Your My Thrill." VornHagen's high tenor vocals have a rich, androgynous timbre, and when he blows in on soprano sax, the horn sound mirrors the leader's smooth singing chops.

"On a Clear Day" bops along, up-tempo, with the vocalist in a hip mode before he goes into a cool burn on the alto horn.

The vocal/instrumental mix keeps the set interesting; here's betting the band(s) put on a killer live show. The accompanists, two separate bands for the two sessions that make up this set, shift from loose to tight grooves effortlessly.

On "In the Wee Small Hours," covered most famously by Frank Sinatra, VornHagen and crew maintain the Chairman's deeply pensive and melancholy mood, with a smoldering tenor sax solo by the leader, and a gorgeous piece of piano solo delicacy and grace by Cliff Monear.

By the time "I'm Old Fashioned," the closer, rolls around, I was hoping for a vocal rendition, but VornHagen's on soprano sax here, and he doesn't disappoint, sounding crisp and clean, leading the band in a sparkling up-tempo version of this classic tune. It's a fitting wrap-up. Kindred Spirits is good old fashioned classic jazz.

Visit PKO Records at www.pkorecords.com and Paul VornHagen at www.paulvornhagen.com .

Namely You, Mindanao, You're My Thrill, On a Clear Day, Noir of Night, Redwoods, Gone With the Wind, In the Wee Small Hours, Perdido, A Welcome Intrusion, I'm Old Fashioned