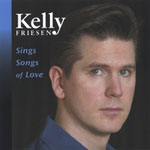 Bassist/vocalist Kelly Friesen was born in Canada and studied bass, piano, voice and theory at the Royal Conservatory of Music in Toronto. A New Yorker since 1993, Friesen studied with Ray Brown for four years in the 1990s. His experience on the New York has been broad; he has appeared with Herb Ellis, Etta Jones and Frank Wess, among others, and has played at several big-name venues.

His 1997 debut album, Back In Time, with Howard Alden and George Kelly, displayed his vocal style. Friesen also appeared in the Woody Allen film Sweet and Lowdown in 1999. The plot line of the film involved the search for guitarist Django Reinhardt, and Friesen's style of bass playing ("slap bass") was so distinctive that it was used throughout the film.

The liner notes accompanying Songs of Love compare Friesen to Nat King Cole and Chet Baker, insofar as his vocals are concerned. I don't hear any connection with Cole, but there is a very definite link to Baker in his vocal delivery and choice of material. Most of the songs on this album are from the Chet Baker songbook, like "I Fall in Love Too Easily," "Let's Get Lost," "My Heart Stood Still" and "Time After Time." Others are not only Baker-associated, but rarely appear on albums any more—like "Do It The Hard Way" and "Look For the Silver Lining." In addition, Friesen provides a version of Lenny Hambro and Roberta Heller's "The Lonely One," which I associate with Cole.

Look For The Silver Lining; You Brought A New Kinda Love To Me; The Lonely One; My Heart Stood Still; Don't Get Around Much Anymore; I Fall In Love Too Easily; Do It the Hard Way; Caravan; Teach Me Tonight; Quiet Nights; Let's Get Lost; Sweet Lorraine; Time After Time; Goodbye.