By SETON HAWKINS
October 17, 2005
Sign in to view read count 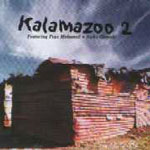 Kalamazoo 2 is the second of four collaborations between the late bassist Sipho Gumede and multi-instrumentalist Pops Mohamed. Recorded in 1999, it features guest musicians Prince Kupi on guitar, Xoli Nkosi on keyboards and brass, and both Barney Rachabane and Mandla Masuku on alto saxophone.

The album opens promisingly—a funky bass-and-keyboard-driven riff along with Mohamed's spoken word greets the listener on "Gauteng Vibe," followed by Rachabane's gritty saxophone. This rather infectious groove keeps you listening throughout the track, leading up to Barney Rachabane trading saxophone solos with a worthy partner: himself.

However, some problems subsequently emerge. First and foremost, Rachabane's saxophone contributions to the album cease (though his playing is used as a sample on "Do the Right Thing"). Replacing him is Mandla Masuku, who is a fine saxophonist (with a very nice solo record of his own), but who simply cannot match the emotional depth and the intensity of Rachabane's playing (but then, to be fair, few can).

Adding to this problem is the fact that Sipho Gumede composed five of the nine tracks. While he is a brilliant bassist (and his playing on this album is stellar), his compositions have a tendency to lean towards synth-driven smooth jazz, as is immediately apparent on track two, "Mirror Never Lies." Masuku's playing, while often very beautiful and lyrical, is a smoother sound than Rachabane's, and it tends to aggravate the problem.

In spite of these problems, Kalamazoo 2 redeems itself quickly. Masuku outdoes himself at several points. One such moment occurs on "Remember Cato Manor," a Gumede composition in which Masuku and guitarist Prince Kupi trade off the melody line in a gorgeous duet that floats over Mohamed's bubbling piano line. Also, on the Pops Mohamed piece "Kort Street Bump Jive" (possibly the strongest track on the album), Masuku lets loose even more, phrasing his lines with a jauntiness lacking somewhat on the other pieces, even bending his notes the way Kippie Moeketsi used to.

Closing the album is "Kalamazoo 2," which, interestingly, was recorded a second time in 1999 by Pops Mohamed. You can hear it on Sophiatown Society (though it's called "All Night Long" on that album), with Morris Goldberg playing saxophone. However, the "Kalamazoo 2" version is much better—Mohamed rearranges the melody so that it begins on an off-beat, and propels the track forward in a way that's lacking on the other version.

On the whole, Kalamazoo 2 has its share of difficulties, but Gumede's rich bass sound and Mohamed's gospel-driven keyboards, along with a strong sense of groove, anchor the album and move it through the smooth jazz outings. The musicians clearly had great fun recording this album, and I had great fun listening to it.